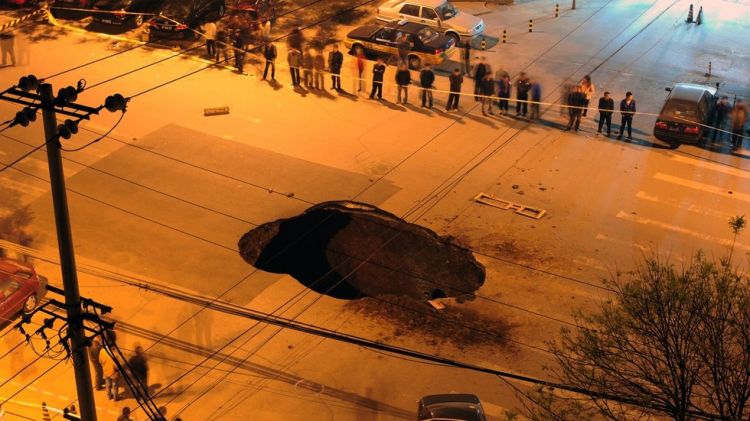 At least six people were killed after a vast sinkhole opened under a bus idling on the side of the road in northwest China, swallowing the vehicle and its commuters whole. Some 10 others remain missing after the accident.
Remarkable footage of the incident surfaced on social media, showing the moment the ground gave way beneath the bus as it stopped to pick up passengers in the city of Xining, sending it careening head-first into a large void. At least one bright explosion is also seen going off inside the hole moments later.
Rescue teams are now searching for the 10 passengers still missing and the cause of the accident is still under investigation, according to Chinese state broadcaster CCTV.
While somewhat uncommon, sinkholes crop up from time to time in China, with one gigantic 60-meter hole opening up in Guyuan city last September to devour a taxi cab whole. Fortunately, unlike the recent case in Xining, there were no casualties in the previous accident.

#China A bus fell into a suddenly developed sinkhole when passengers were boarding the bus at the bus stop.

Explosions and fire are visible from the sinkhole.

This happened in Xining, Qinghai Province; some sources suggest 13 were injured and 2 are still missing. pic.twitter.com/ieB1TdnfvX