US, China sign phase one of trade deal after two years of tensions | Eurasia Diary - ednews.net

daily news
Spitzer telescope to be decommssioned after 16 years - VIDEO
The next mega disasters that could happen at any moment - and kill us all - VIDEO
Azerbaijan gets 85% rise in wind power production
Russia's TOR-M1 missile system could detect any air attack - VIDEO
Hungary interested in buying natural gas from Turkmenistan
Iran will never seek nuclear arms, with or without nuclear deal - Rouhani
How a Russian introduced bodybuilding to the masses
Russia’s MiG-31BM interceptor fighters hold dogfight in stratosphere in Siberia drills - VIDEO
﻿

The new Russian Su-34 will be able to detect and shoot down invisible targets - VIDEO
Read: 1193

Putin - 'We see how an array of Western countries are resorting to pressure, intimidation and blackmail of sovereign African governments'
Read: 1127

US, China sign phase one of trade deal after two years of tensions 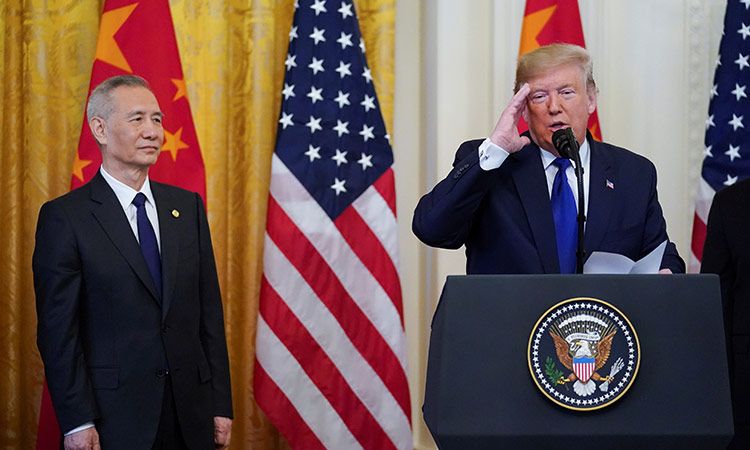 The United States and China signed a truce in their trade war on Wednesday after nearly two years of tensions, bringing relief to markets but largely leaving massive tariffs in place.

Eurasia Diary reports citing Gulf Today, the "phase one" deal is also a boon for Donald Trump as he faces an impeachment trial and a tough re-election fight this year, with the US president hailing the agreement as "momentous".

However, with tariffs still in place on two-thirds of more than $500 billion in imports from China, US consumers and businesses will be left to foot the bill.

The agreement includes pledges from China to beef up purchases of US agricultural goods and other exports for two years, provides some protections for US technology, and new enforcement mechanisms that allow Washington to quickly impose penalties that Beijing cannot respond to.

"Today, we take a momentous step, one that has never been taken before with China", which will ensure "fair and reciprocal trade", Trump said at the White House signing ceremony.

"Together, we are righting the wrongs of the past".

But as Trump ambled through a lengthy commentary on the deal, major networks switched away from the White House to Congress where articles of impeachment were to be presented to the Senate as the first step towards a trial.

The easing of trade frictions has boosted stock markets worldwide in recent weeks, as it takes the threat of new tariffs off the table for now. On Wall Street, the Dow and S&P 500 ended at new record highs after the signing, while Asian markets were mostly up in the afternoon.

Trump signed the deal with China's Vice Premier Liu He, who has led Beijing's negotiations with US Trade Representative Robert Lighthizer and Treasury Secretary Steven Mnuchin.