Iran urgently deployed dozens of missile systems on the coast of Strait of Hormuz
Read: 1177 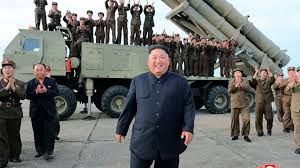 Earlier it was reported that North Korea on Saturday launched two shells from the region of Seongcheon County in the province of Pyeongchang-pukto. The South Korean military suggested that these were short-range missiles. The longest range of missiles was approximately 410 kilometers, altitude – approximately 50 kilometers.

This is the third launch of the DPRK missiles in 2020, the previous ones took place on March 2 and 9 during the artillery exercises.

“The purpose of demonstration firing is to once again confirm the tactical property and power of the new weapons system supplied to the military units of the Korean People’s Army (KPA), and to personally demonstrate this to command personnel … Demonstration firing clearly demonstrated the features of guided missiles, including “differently defined flight paths and incidence angles, accuracy of hitting the target and the power of the warhead,” the KCNA reports.

At the test, along with Kim Jong-un, there were party leaders, General Staff chief Park Jung Chong and KPA corps commanders. The rockets took off “with a tremendous thunder and dazzling thunder” and reached the island designated as the target.

According to the agency, Kim Jong-un noted that the newly developed DPRK new weapons systems, as well as those strategic weapons systems that are still under development, will make a “decisive contribution” to the implementation of the party’s strategic goal – the “epoch-making change in the country’s defense strategy.”

“We must strengthen our firepower in order to be able to destroy any enemy outside our territory if he dares to carry out military operations against our country, this is precisely the goal set by the party to build national defense and the most advanced defense strategy, deterrence force,” Kim Jong-un said, quoted by the KCNA.

The KCNA also reported that on March 20, Kim Jong-un led the competition in the accuracy of large artillery units of the KPA on the western front.

The Joint Chiefs of Staff of South Korea condemned the “improper” actions of the DPRK, which launches during the coronavirus epidemic, and demanded “stop them immediately.”