'Information on use of Azerbaijan’s airspace by aircrafts, delivered air strikes on Iran, is lie' - Azerbaijani MoD
Read: 354

'Turkey seeking to end 2020 with growth' 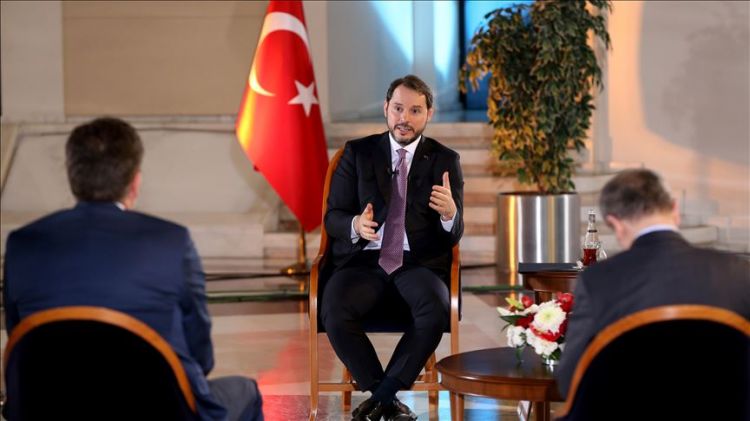 Turkey is seeking to end 2020 with a positive economic growth rate despite negative forecasts due to the coronavirus crisis, the country’s treasury and finance minister said Wednesday, EDNews.net reports citing Anadolu Agency.

Turkey will be one of the least affected countries by the coronavirus outbreak in employment and growth, Berat Albayrak told national broadcaster TRT.

He noted that the Turkish economy is projected to post growth in the first quarter of this year.

With the first COVID-19 case detected in Turkey in mid-Mach, the impact of the pandemic was earnest in April.

While many countries are expected to see a serious recession in the second quarter of this year, Turkey will be less affected compared to others, Albayrak underlined.

Pointing to Turkey's ‘Economic Stability Shield’ package unveiled this March to help companies cope with the economic fallout of the virus, Albayrak said the value of the relief package has reached 260 billion Turkish liras ($38 billion) so far.

Albayrak recalled that with the multiplier effect, the size of the bailout package had hit nearly 600 billion liras ($89 billion), equivalent to 10%-11% of the country's GDP.

He stressed that normalization after the coronavirus crisis will start in Turkey as of June, like the rest of the world.

"We are entering a period where gradual buoyancy will start in exports, trade, tourism and the domestic market in June and July," he said.

"Turkey will pursue policies based on production and borrowing with local currencies," Albayrak underlined.

He noted that the country will take steps to ensure that local markets and domestic demand are rapidly revived in the post-pandemic era.

"We will announce incentive packages to normalize the domestic market," Albayrak said.

Stressing that Turkey is conducting talks to establish swap lines with many countries, he said: "We should consider swap matters in the context of trade in local currencies," which the country prioritizes.