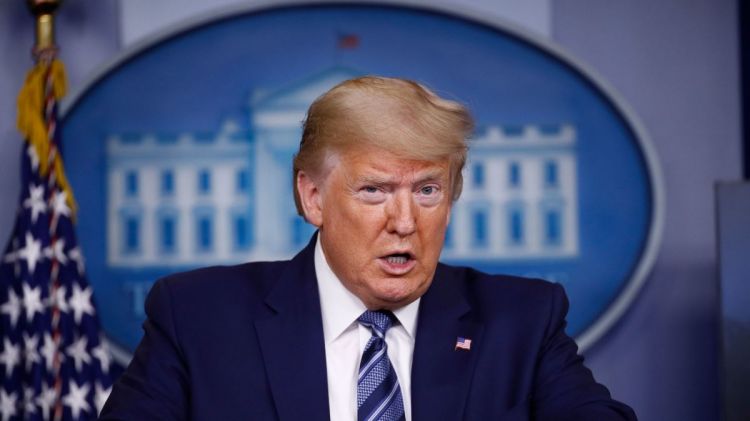 As protests in Minneapolis over the death of a handcuffed African American turned increasingly violent, President Donald Trump threatened to send in armed forces and warned that “when the looting starts, the shooting starts”, EDNews.net reports citing Bloomberg.

In a pair of early morning tweets on Friday, the president assailed the city’s mayor, Jacob Frey, as weak and said he had told Minnesota Governor Tim Walz that “the military is with him all the way.”

On Thursday night, a mob broke into the Third Precinct stationhouse in Minneapolis and set fire to it, according to the Associated Press. The officers had fled the building.

Protests over the death of George Floyd on Monday spread across the nation after a video of his encounter with police officers from the precinct spread across social media and television.

In the video, Floyd is on the pavement next to a police car with a white officer kneeling on his neck. He says that he cannot breath. The four officers involved were fired on Tuesday, though no charges have been filed.

Expressions of outrage from across the political spectrum followed the release of the video. There were protests in several other cities, including New York and Albuquerque. In Columbus, Ohio, protesters tried unsuccessfully to storm the statehouse, according to local news reports.

In Minneapolis, some of the demonstrations were punctuated with looting and arson.

Trump in one of his Twitter posts said “These THUGS are dishonoring the memory of George Floyd and I won’t let that happen.”

The president also mentioned deploying the National Guard. Those forces are under the control of governors, but can be ordered into federal service by a president during an emergency. Walz has already activated the Minnesota Guard, the AP reported.

Presumptive Democratic nominee Joe Biden on Thursday that Floyd’s death was a reminder of the “ugly underbelly of our society” and urged protesters in Minneapolis to “exercise their rights peacefully and safely.”

“We can’t ignore that we are in a country with an open wound right now. A wound far older and deeper than George Floyd’s -- George Floyd’s killing -- and his brutal, brutal death captured on film,” Biden said at a virtual fundraiser.

On Wednesday, Biden called for a federal investigation into Floyd’s death.