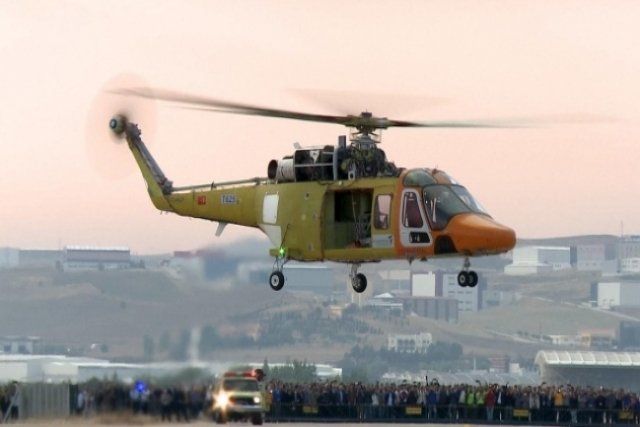 The Turkish company Turkish Aerospace Industries (TAI) held a closed presentation of the model of the promising attack helicopter T-629, which should occupy a niche between the light attack helicopters T-129 Atak and the currently developed heavy Atak-2 helicopters, EDNews.net reports citing Bulgarianmilitary.com.

According to N+1, because of the “intermediate” position of the helicopter, TAI Executive Director Temel Kotil jokingly called the new Atak-1.5 machine.

The development of the T-629 helicopter has been underway since 2017. In 2019, the company defended the helicopter project and began assembling the first flight model of the machine.

The mass of T-629 will be 6 tons. For comparison, the mass of the T-129 is 5 tons, and the Atak-2 is 10 tons. Technical details about the new car have not yet been disclosed. At the presentation, the helicopter model was equipped with mock-ups of launchers of 70 mm unguided missiles and L-UMTAS anti-tank missiles. The developers plan to conduct the first flight of the T-629 until the end of 2020.

The development of the heavy attack helicopter Atak-2 has been underway in Turkey since the beginning of last year. The first flight of this aircraft is planned for 2024–2025. The machine will receive two turboshaft engines and will be able to operate in high altitude and high temperatures. Atak-2 will be able to carry a payload of 1.2 tons, it will receive an air cannon, air-to-air and air-to-surface missiles and 70 mm unguided missiles.

Currently, Turkey does not produce mass-produced attack helicopters of its own design. The country produces light attack helicopters T-129 Atak, created on the basis of the Italian A-129 Mongoose. This two-seater is 13.5 meters long and 3.4 meters high. T-129 has a speed of up to 278 km / h and performs flights at a range of up to 510 km. The helicopter is armed with a 20 mm cannon and can carry guided and unguided missiles.