What does withdrawal of US troops from Iraq mean? - American military expert explains
Read: 699

Konul Nurullayeva attended a videoconference of the PACE Committee
Read: 425 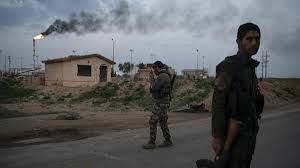 The Russian and Syrian interagency coordination headquarters on the repatriation of Syrian refugees on Friday said that the United States was trying to make international organisations provide aid to Washington-controlled militant groups by using Rukban camp dwellers as a bargaining chip, EDNews.net reports citing Sputnik.

"Once again, the United States demonstrates its readiness to let everyone out of Rukban in exchange for the delivery of humanitarian aid to the camp. In this way, the US side seeks to provide their militants with everything necessary at the expense of international humanitarian organisations, instead of solving the camp's problems on their own, as required by international law from the occupier", the headquarters said in a joint statement.

Moscow and Damascus have been consistently warning about the deteriorating humanitarian situation in the camp, located in a 34-mile, US-controlled area around the At Tanf military base.

Russia has repeatedly raised alarm over the plight of the camp's inhabitants. In particular, the Russian reconciliation centre and the Syrian government have helped evacuate thousands wishing to leave Rukban.

The camp houses around 25,000 people in conditions described by the World Health Organisation as "deplorable", as they are suffering from a lack of food, medical care, and basic amenities. At the same time, reports suggest that the US-backed militants are charging people for food and medical help, re-selling humanitarian aid to refugees.