daily news
Assistant to Azerbaijani President and FM meet with Foreign Ministers of Lithuania, Austria and Romania
Georgia announces date of elections to local self-government bodies
Ambassadors of Turkey and Pakistan to Azerbaijan meet
Official talks on Cyprus only after both sides recognized as equal
Probe finds Israeli strikes in Gaza 'could be a war crime'
Collective security vital in Iran's regional policy doctrine
Azerbaijani, Saudi Arabian FMs discuss bilateral relations
About 650 troops to remain in Afghanistan after US completes pullout
﻿ 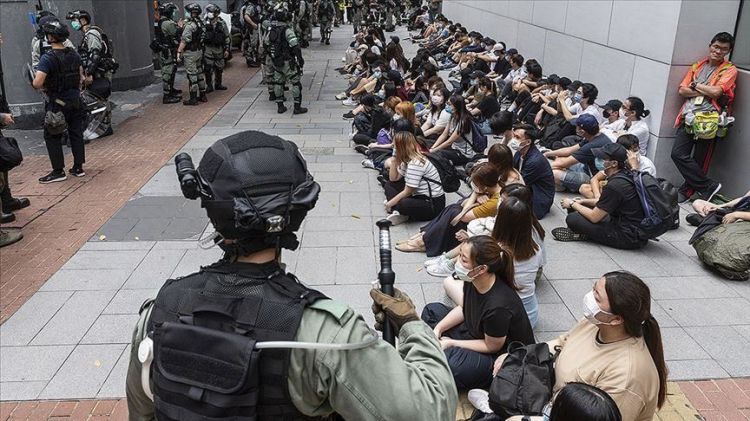 China has passed a national security law for Hong Kong on Tuesday to rein in the semi-autonomous region after months of protests last year, EDNews.net reports citing Anadolu Agency.

The new law expected to come into effect on July 1, the 23rd anniversary of the city’s handover to China from British rule.

Earlier, Hong Kong Chief Executive Carrie Lam Cheng Yuet-ngor during her weekly briefing refused to comment on the new law and said she would not answer any question until the new law is passed.

“It would be inappropriate for me to answer any questions and explain [the law] at this stage,” the SCMP quoted her as saying.

Soon after the passage of the law, key opposition leaders Joshua Wong Chi-fung, Nathan Law Kwun-chung and Agnes Chow Ting announced to resign from their party and to quit politics.

“I now announce that I have resigned as secretary general of Demosisto, and quit the party at the same time. I will practice my beliefs in a personal capacity,” Wong quoted SCMP as saying.

Wang is believed to have played a major role in lobbying US politicians for their support to pass the Hong Kong Human Rights and Democracy Act last year.

US Secretary of State Mike Pompeo on Monday announced his country was ending the export of sensitive military equipment to Hong Kong.

"Today, the United States is ending exports of @StateDeptPM controlled U.S. origin defense equipment and sensitive @CommerceGov controlled dual-use technologies to Hong Kong. If Beijing now treats Hong Kong as “One Country, One System,” so must we," Pompeo tweeted.

Pompeo also criticized the Chinese move to imposed visa restrictions on US officials and said: "The Chinese Communist Party's threats to restrict visas for U.S. citizens is the latest example of Beijing’s refusal to accept responsibility for breaking its commitment to the people of Hong Kong. We will not be deterred from taking action to respond."

On Monday, China announced visa restrictions on US officials who “behave egregiously” in relation to Hong Kong affairs, days after Washington announced similar restrictions on Chinese officials believed to be undermining freedoms in the Asian financial hub.

China’s Foreign Ministry Spokesman Zhao Lijian urged the US to stop reviewing or implementing any Hong Kong-related acts and said: “Any effort by the US to hinder Beijing’s introduction of a national security law in Hong Kong would not succeed.”

Last month, the NPC had approved a new national security bill for Hong Kong to tackle "anti-national" activities which under the new law will be a crime to undermine Beijing's authority in Hong Kong.

The semi-autonomous region became part of China in 1997. It witnessed large-scale protests last year against a move to legalize extradition of accused persons to mainland China.