“Armenia once again demonstrates that it cannot live in peace with its neighbors” - Azerbaijani Presidential aide
Read: 752

'I want to thank all the young people in this country!' - UNICEF Representative to Azerbaijan on International Youth Day - VIDEO
Read: 732 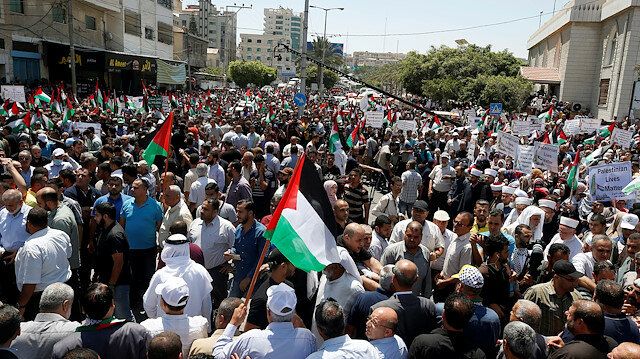 Hundreds of Palestinians staged a rally in the Gaza Strip on Wednesday to protest an Israeli plan to annex parts of the occupied West Bank, EDNews.net reports citing Yeni Safak.

"The annexation is a threat to the Palestinians and violates international legitimacy resolutions,” Saadi Abed of the Palestinian Democratic Union (FIDA) told the rally.

“The land grip will give a way for a new Palestinian intifada,” he said, going on to call on the Palestinians to close ranks and “end the rift to face occupation plans”.

Abed called on the Palestinian Authority to pursue efforts to “hold Israel accountable in front of the International Criminal Court for its crimes against the Palestinian people".

The annexation plan was scheduled to be declared by Israeli Prime Minister Benjamin Netanyahu on Wednesday.

However, uncertainty is surrounding Netanyahu's position in the light of the International rejection to the Israeli plan along with differences with the US administration on the application of the plan.