US blocked major arms deals with Turkey, including the F-16 modernization
Read: 765

“Armenia once again demonstrates that it cannot live in peace with its neighbors” - Azerbaijani Presidential aide
Read: 754

'I want to thank all the young people in this country!' - UNICEF Representative to Azerbaijan on International Youth Day - VIDEO
Read: 734 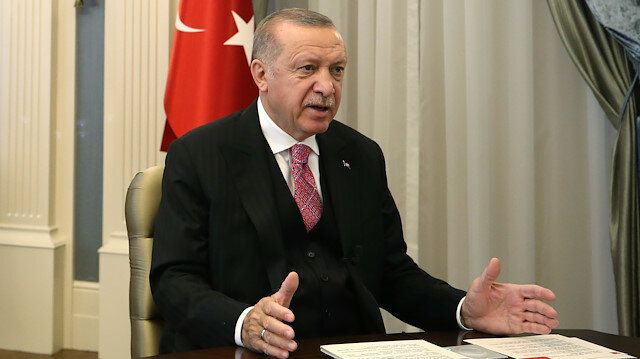 "Maintaining the political unity and territorial integrity of Syria, the establishment of calm on the ground, and a lasting solution to the conflict are our priority," Recep Tayyip Erdogan told a video link summit of the leaders of Turkey, Russia, and Iran summit under the Astana process.

“The trilateral summit process under the Astana format that we initiated in November 2017 has made critical contributions to the establishment of peace, security and stability in Syria,” Erdogan said, adding that today’s meeting is the sixth one under the format.

“Turkey has been standing with our Syrian brothers and sisters since the start of the conflict,” he said, adding that the country has welcomed millions of Syrians without discrimination since start of the civil war in 2011.

Turkey hosts some 4 million Syrian refugees, more than any other country in the world.

Erdogan added that Turkey has also stepped in with troops to prevent humanitarian crises and frustrate separatists, referring to a trio of operations launched since 2016 to fight terrorists and provide security in northern Syria, just south of Turkey’s border.

"We'll continue to do our best to provide peace, security, and stability in our neighbor Syria," he said.

“The cooperation we will show as Astana guarantors will, no doubt, determine the future of this country,” he added.

The trilateral meeting is ongoing with the attendance of Iranian President Hassan Rouhani and his Russian counterpart Vladimir Putin.

From the Turkish side, Foreign Minister Mevlut Cavusoglu and National Defense Minister Hulusi Akar are also present at the meeting.