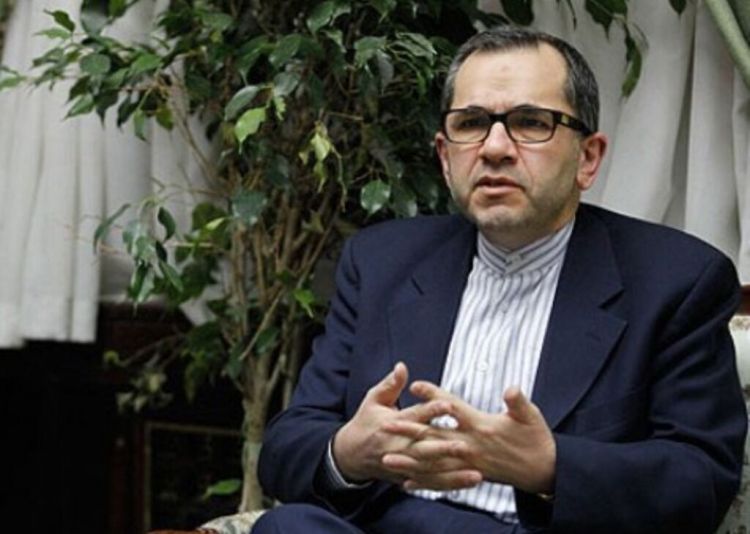 Iran’s Ambassador and Permanent Representative to the United Nations Majid Takht Ravanchi has underlined the need for lifting unilateral sanctions which are weakening the capacity of targeted countries to effectively respond to the spread of the coronavirus disease (COVID-19), EDNews.net reports citing IRNA.

Takht Ravanchi made the remarks while addressing a UN Security Council meeting at the UN headquarters on Thursday night local time to review the implications of Covid-19 on the maintenance of international peace and security.

He said that "serious outbreaks of certain diseases with a high mortality rate, entail security implications in conflict situations. One example is the impacts of COVID-19 pandemic in the conflict situations in our region from Yemen to Palestine to Syria.

In these countries, the pandemic has worsened the socioeconomic situations, negatively impacted de-escalation efforts and peace negotiations and, by adding a new layer to the already existing problems, has further complicated the overall situations.

In Yemen, where the nation is already experiencing the world’s worst humanitarian crisis, the death toll from the virus could “exceed the combined toll of war, disease and hunger over the last five years”, as stated by the UN officials present in that country.

At the same time, due to the inaction of the Security Council in confronting the foreign aggression against this country, the aggressors are emboldened, by taking advantage of the COVID-19 pandemic, to even escalate airstrikes and tighten the siege against ports and airports which channel humanitarian assistance to the people in need. Such unlawful measures have no other designation than war crimes and must be prevented.

In Palestine, the Israeli regime has continued over a decade-long inhumane blockade against Gaza Strip even during the Corona virus outbreak leading to further deterioration of the already fragile humanitarian situation there.

In Syria, where the situation in many parts of the country were improving as a result of the defeat of terrorists and restoration of the Government’s control over its territory, the outbreak of COVID-19 has relatively slowed down the return of displaced persons and reconstruction efforts.

However, the humanitarian situation has worsened as a result of an irresponsible policy of a permanent member of the Security Council, imposing unlawful unilateral sanctions against the Syrian people.

As a country experiencing one of the worst outbreaks of the Coronavirus and one of the most inhumane sanctions of the U.S., the Islamic Republic of Iran is fully aware as to how such sanctions drastically hinder national responses of targeted countries in effectively preventing the spread of the virus.

In practice, such unlawful sanctions hamper the import of humanitarian goods, particularly medical equipment and medicine, mainly targeting the patients -- the most vulnerable component of every society. This alone indicates how immoral, inhumane and illegitimate such sanctions are, particularly when the entire world is facing a highly contagious virus targeting the whole human family, and the only way to push it back is “solidarity in action” and well-coordinated international cooperation.

Moreover, it shows that the application of unilateral sanctions under the current unprecedented global health crisis involving all nations is against the common interests of the whole of humanity.

Despite strong international calls for their immediate removal, made including by the United Nations Secretary-General, the United Nations High Commissioner for Human Rights and some other international dignitaries as well as many former and current statesmen and stateswomen, parliamentarians, religious leaders, academia, non-governmental organizations and civil society institutions, the application of these illegal sanctions continues.

Furthermore, it must be born in mind that measures such as the inhumane siege of Yemen and Gaza Strip as well as the imposition of unlawful unilateral sanctions such as the one recently imposed on Syria, might contribute not only to the spread of deadly diseases but also to the deterioration of the conflicts.

While the impacts of serious outbreaks of certain diseases with a high mortality rate in conflict situations need to be addressed, the immoral and inhumane nature of unilateral sanctions and their impacts on extending the pandemics and worsening the conflicts must not be overlooked.