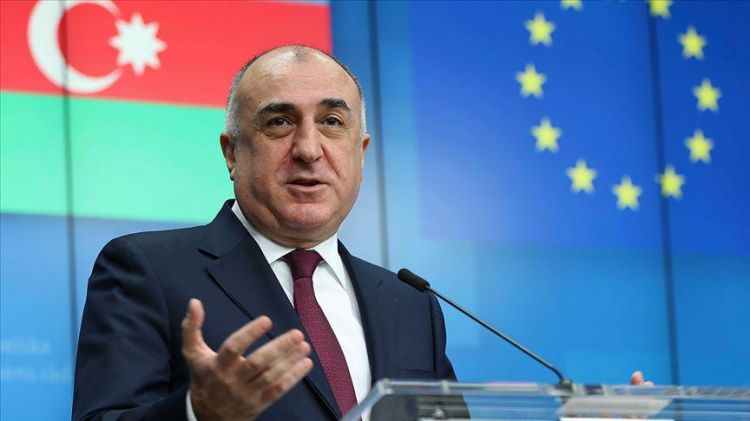 The European Union must tailor and revise its expectations to ever-changing needs and circumstances and greater flexibility of the EU in this respect will play a critical role in maintaining the viability and relevance of Eastern Partnership, Azerbaijan’s Foreign Minister Elmar Mammadyarov said at the meeting of Eastern Partnership Foreign Ministers with EU Commissioner for Neighborhood and Enlargement Oliver Varheyli on July 1 via video conference.

Mammadyarov emphasized that there is an urgent need to move to a state of readiness for the next normal and planning across multiple horizons. “Comprehensive economic policy should be combined with international support by measures to strengthen healthcare and institutions, facilitation of trade and investments with a focus on digitalization, connectivity and innovation,” he said.

Furthermore, the minister pointed out that the actions aimed at reviving and internationalization of SMEs are a priority in scaling up economic development.

“We look forward to the involvement of European financial institutions in “SME Development Funds” established in partner countries and application of innovative financing methods, which will support the transition to ‘Green Economy’,” Mammadyarov added.

For boosting trade, we expect the EU to work with Azerbaijan on increasing the number of entities authorized to export agricultural/food products to the EU. Food Safety Agency of Azerbaijan has embarked on an ambitious reform strategy aimed at strengthening Sanitary and Phytosanitary (SPS) measures in convergence with the EU standards.

We are ready to work with the EU, which will help the local SMEs to strengthen their links with the EU innovation ecosystems,” noted the minister.

Regarding energy connectivity, Mammadyarov said that Azerbaijan is closely working with the counterparts in Western Balkans in order to extend the gas supply to the wider geographic region. He stressed that the Southern Gas Corridor will be instrumental in delivering EU policy priorities in Western Balkans, which seeks the diversification of supply sources and routes.

Emphasizing the importance of EU’s support to promote the East-West and North-South trade corridors, Mammadyarov invited the EU to support the efforts to build GUAM transport corridor that will provide an alternative route to Central Asia and beyond and the OSCE project “Promoting green ports and connectivity in the Caspian Sea region”.

“Bringing transparency and accountability standards in public administration to the European standards is a key domestic policy priority and we are ready to further our cooperation in this regard,” added the minister.

In addition, Mammadyarov commended the EU principled position with respect to international law and its application to the conflict settlement based on the principles enshrined in Helsinki Final Act, particularly, respect to the territorial integrity of states within their internationally recognized borders.

“We expect the EU to continue to promote the peaceful settlement of unresolved conflicts, reinforce respect for international law in its policies and practices, inter-alia, by opposing illegal practices aimed at consolidating the status quo via illegal resettlements and various infrastructural projects in the occupied territories and ongoing attempts to alter existing formats in an effort to derail political settlement of a conflict,” said Mammadyarov.

Furthermore, the minister pointed out that ensuring respect for rights of conflict-affected populations should cover targeted measures enforcing the right of forcibly expelled Azerbaijanis to return to their homelands.“Fostering dialogue between Azerbaijani and Armenian communities of Nagorno-Karabakh region of Azerbaijan could serve as a decent confidence-building measure”.

Stressing the significance of the EU’s differentiation policy for keeping all partners on board, the minister noted that it should not entail an abuse or misinterpretation of international law principles as advocated by some EaP partner countries.

“Another serious danger to the entire region is the Soviet-era nuclear power plant, which lies on some of Earth’s most earthquake-prone terrain. We expect the EU to step up efforts to achieve closure and safe decommissioning of outdated nuclear power plants which have no room for improvement to meet international nuclear safety standards,” said Mammadyarov.

The minister also highlighted the importance of reinvigorating regional and international efforts to tackle the issue of global emissions and to work towards a greener economy through concrete projects. He underlined that Azerbaijan is interested in working closely with the EU to promote accession to and implementation of international agreements on water cooperation, including the 1992 Helsinki Convention by the upstream countries.

Regarding that the COVID-19 pandemic, Mammadyarov said that practical cooperation in public health, including training medical staff, will bring a tangible deliverable to EAP.

“Azerbaijan is currently working on a government strategy for digital transformation. We are closely collaborating with “Microsoft” to develop artificial intelligence, address potential cyber-security threats. The promotion of start-ups on people’s digital skills will help us to diversify away from our economy from oil-sector.

In the case of a legal framework for harmonized roaming tariffs prepared by partner countries, Mammadyarov emphasized that this exercise should be complemented with the EU’s commitment to engage with EAP countries on reduced roaming tariffs. “It will be one of the tangible deliverables for our citizens,” he added.

Commending the positive feedback of the European Commission on the implementation of Visa and Readmission Agreements, Mammadyarov said that opening visa liberalization dialogue could be a solid milestone in Azerbaijan’s cooperation with the EU.

Speaking about racial and religious discrimination, he said that it spreads hatred and fuels violence across communities which unfortunately claim human lives. “We need to work together to promote tolerance, diversity, and peaceful-coexistence and to counter all manifestations of violence, including violent separatism, extremism and xenophobia,” the minister noted.