Over 160 tanks and armored vehicles arrive for Russian Army and Airborne Force
Read: 900

Russia welcomes US plans to reduce troop size in Afghanistan to 4,000
Read: 625

Ayasofia calls prayers again - Is this the everlasting victory of Islam? 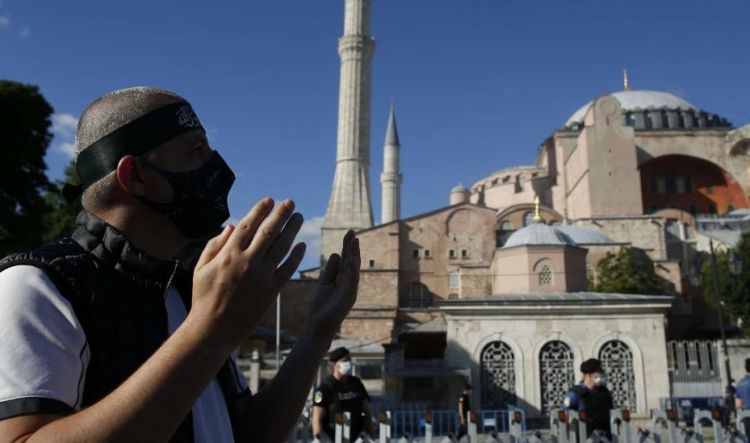 Indeed, the verses above manifested the true voice of what was inscribed in the holy book.
Yesterday President of the Turkish Republic Recep Tayyip Erdogan gave a blessing tiding to Muslims around the world. Having achieved the annulment of the 1934 government decree turning Istanbul's Ayasofya into a museum, it once again serviced back to Muslim population to pray there.
Despite the pressures from both internal and external anti-Islamic powers, Turkish President called international organisations to respect the decision of the court as legitimate rights of the state.
"Turkey has been preservinrg it since Fatih Sultan Mehmet had conqured Istanbul about 567 years ago after 8 weeks 3 days of battle with Romans. When Istanbul was conquered by Fatih, it was ascribed as property of the religious foundation of the Osmanly Empire (Ottoman) and in the document it stated:
I, Fatih Sultan Mehmet, declare that this building becomes a legal property of my state, and what if it is then misused, illegally captured, converted or remodified, may curses of Allah and his angels and all Muslims be upon him," said President Erdogan in his speech on Friday.
Seemingly, Erdogan approached the issue from religious point of view highlighting Fatih's testimony in which he forbade those affecting the rule of using the building for other purposes. As for the reactions from western media, it does not surprise with its obviously biased information calling Erdogan's act as violation of cultural heritege. However, in fact, it exposed of some black intentions as Ayasofya seemed to be the only way of breathing for those who soothed their hearts from the loss of Roman Empire. Even some of them yet never digested spelling Istanbul rather deliberately calling Constantinople.
Today, Turkey is one of the tolerant Muslim countries that hugg non-muslims, people of all cultures, and hundreds of Sinegogs, Churches and Chepels serve for population in the country. However some organisations with their allied media outlets still blind to these facts. A questions arises:
- While accordinrg to western media saying the world cries for the conversion of Ayasofya back to serving for Muslims, why they never disappointed for thousands of cultural heritages that burned down in Syria and other Muslim countries.
I will stop my word here as the truth speaks. This time the purpose is not to lash them, but to awaken them to acknowledge the approaching victory of the truth - the truth of everlasting Islam.
By Elnur Enveroglu