The democratic struggle for peace and justice in Nicaragua | Eurasia Diary - ednews.net

The democratic struggle for peace and justice in Nicaragua 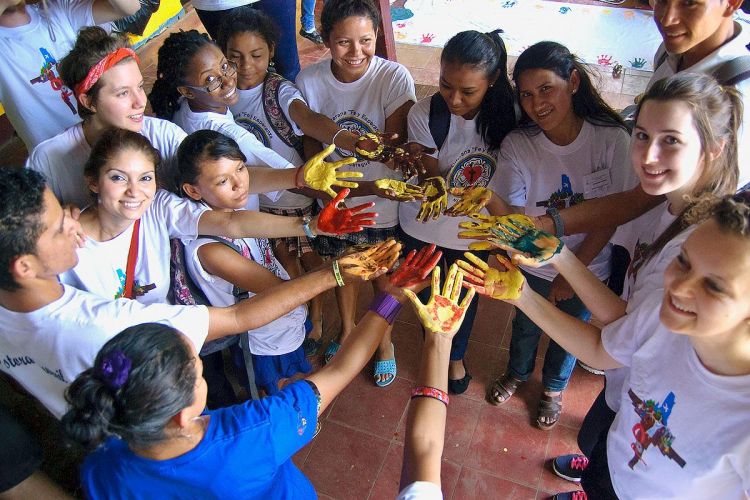 Nicaragua is a poor and impoverished country. And above all it has been impoverished by the management of the Ortega government over the last thirteen years. When Ortega returned to government in 2007, he did basically two things. On the one hand, he maintained, and even deepened, in alliance with big capital, his money-making policies. He did so, he does so, despite his pro-poor discourse. The social costs of those policies increased poverty and made the informal sector of the economy grow, which today is close to 70%.

At the same time, as soon as he came to power, he began a process of exercising personal-family control over all state institutions. The weights and counterweights disappeared and the head of the Executive (Ortega) and his wife, the vice-president (Rosario Murillo), have shattered the institutionality. A confusion between state, family and party (what is left of the FLSN), is what exercises all the power in the country. They do so with the passive complicity of the army and the active support - as a repressive force - of the police, whose chief is the father-in-law of the Ortega-Murillo couple.

This framework made it easier for the benefits of Venezuelan oil cooperation with Nicaragua to be privatized for the benefit of the family in power, which became a new economic group that uses State institutions for its own benefit. There is no sphere of business in which the Ortega Murillo family is not present, directly or through front men: exploitation and export of wood, media, tourism, private surveillance, distribution of gasoline and derivatives, flower shops. In short, anyone.

It could not be done with less than 3 billion dollars which meant, according to conservative calculations, the amount of cooperation from the government of Hugo Chavez first and Maduro later, for ten years. And that amount, for the size of Nicaragua's economy, is quite a lot. Cooperation only diminished after the crisis in Venezuela.

Nicaragua has many natural resources. But the use of those resources, during the last decades, and that has not changed since Ortega came to power, has only been for the benefit of minorities. That is true of forest, mining and fishing resources.

In any of those sectors, there are now interests of the presidential family.

A part, the smallest part, of the benefits of Venezuelan cooperation was destined to cliente list assistance, but nothing substantive that would diminish the poverty of the majority.

In 2018, the alliance between big capital and the regime was broken. The corporatist system entered into an irreversible crisis, the result of two things: the authoritarianism of the regime, which, going beyond the agreements with big business, imposed a social security reform, hitting the employers, but above all the workers, and the outbreak of the citizen's rebellion in April, which exposed the illegitimacy of the regime and its authoritarian nature.

The citizen's civic rebellion was brutally repressed. More than 300 Nicaraguans were murdered, more than 3,500 people have passed through the dictatorship's prisons as political prisoners, and more than 100,000 have been forced to seek refuge abroad, including in Spain.

The International Group of Independent Experts (GIEI), formed by agreement of the OAS, the Inter-American Commission on Human Rights (IACHR) and the government itself, ruled, in a detailed and comprehensive report, that the government committed crimes against humanity. The regime expelled the GIEI from the country and still does not allow the IACHR and the UN Office of the High Commissioner for Human Rights to enter the country.

The regime's repression has plunged the country into an already long political crisis, which has resulted -as it could not be otherwise- in a deep economic and social crisis. At the beginning of this year, it was already estimated that the Gross Domestic Product would fall by 7-8%.

It is under these conditions that the COVID 19 pandemic arrives in Nicaragua in March.

And, contrary to what could reasonably be expected, the Ortega Murillo regime has reacted irrationally and maliciously. Not only has it failed to implement and enforce any of the World Health Organization's (WHO) recommendations, it has done the opposite.

It has not declared quarantine of any kind. It has not suspended classes. It has embargoed the application of the tests and prohibited them from being carried out by private hospitals. The fate of 26,000 test kits received from the Central American Bank for Economic Integration (CABEI) remains unknown. It has prohibited health personnel from using protective equipment, in their accounts, so as not to "alarm the population". It hides information and there is no consistency in the sporadic appearances of health authorities on the subject.

In the midst of these conditions, the Nicaraguan citizenry resists and continues to demand free, inclusive, transparent and observed elections. The Nicaraguan opposition is united in the National Coalition, which brings together political and social movements and parties, including the Blue and White National Unity, which brings together dozens of organizations, most of which were formed as a result of the citizen rebellion.

All the opposition forces agree that the way to free the country from orteguismo is peaceful. That is why they are demanding electoral reforms and respect for constitutional freedoms.

We Nicaraguans are convinced that only in this way can a democratic government be established in the country, one that rebuilds institutions and meets the demands of justice.

A citizen survey conducted between May 15 and June 8 by the prestigious company Cid Gallup, and another more recent one by the Inter-American Dialogue in June, reveal that most Nicaraguans believe the country is on the wrong track and do not believe Daniel Ortega can change it. They themselves identify the pandemic and the Ortega government as Nicaragua's main problems. And they are right.