Azerbaijan has right to use its armed forces to take back its legally acknowledged territory - British journalist
Read: 2030 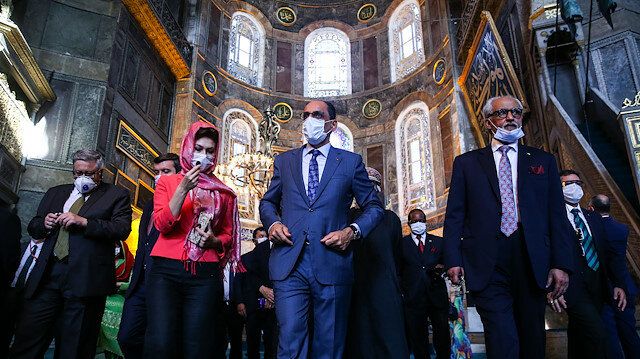 A senior Turkish official visited the Grand Hagia Sophia Mosque on Thursday where he answered questions posed by 30 ambassadors and gave information about the history of the structure, EDNews.net reports citing Yeni Safak.

Ibrahim Kalin underlined the historical importance of turning Hagia Sophia into a mosque after 86 years.

“Today, we witnessed again how impressive this place in terms of its historical identity and artistic aspects,” according to Kalin, who said it is a very important place in the political, cultural, religious and aesthetic history of the Ottoman Empire.

“Especially after Hagia Sophia being a mosque, we do not have the slightest hesitation about preserving the historical and cultural heritage and identity of it,” he added.

On July 24, Friday prayers in the Hagia Sophia Grand Mosque marked the first Muslim acts of worship there in 86 years.

In 1985, Hagia Sophia was added to the UNESCO World Heritage List.

Besides being a mosque, Hagia Sophia is also among Turkey's top tourism destinations and will remain open for domestic and foreign visitors.