Some 2,800 People join rally in support of arrested ex-governor in Khabarovsk – Authorities 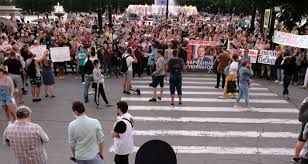 Some 2,800 people are taking part in an unauthorized rally in Russia's Far Eastern city of Khabarovsk on Saturday, about a month since the protests in support of arrested former Governor Sergey Furgal erupted across the region, the city administration said, EDNews.net reports citing Sputnik.

"The capital of the [Khabarovsk] territory is witnessing a new rally in support of arrested former Governor Sergey Furgal. This time, some 2,800 people have joined it. The number of protesters is decreasing for third week in a row," the administration said in a statement.

A Sputnik correspondent reported that the protesters were carrying the flags of Russia, Khabarovsk Territory and the Soviet Union. The rally caused some traffic problems in the city. Police officers warned the protesters that the rally was unauthorized and called on them to return home, but the demonstration continued.

On 20 July, Russian President Vladimir Putin appointed Mikhail Degtyarev (also from LDPR) an interim governor of the Khabarovsk Territory, but the protests are still underway.