'Turkey to continue its plans in E.Med' | Eurasia Diary - ednews.net

Azerbaijan has right to use its armed forces to take back its legally acknowledged territory - British journalist
Read: 831

'Turkey to continue its plans in E.Med' 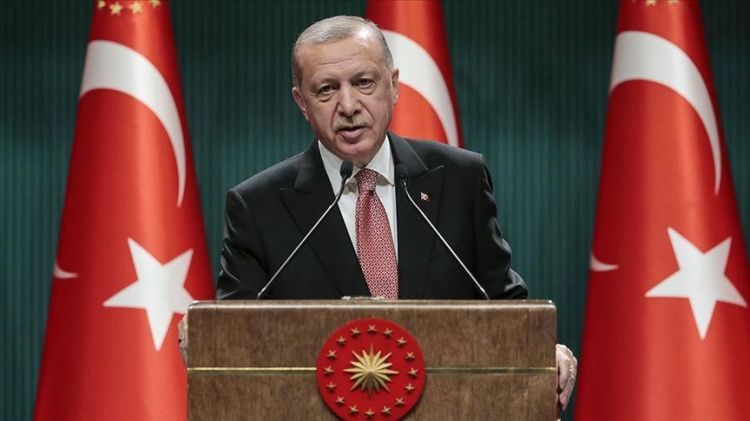 Turkey will continue to implement its own plans in the field and diplomacy until a common sense prevails on the issue of Eastern Mediterranean, the Turkish president said Monday, EDNews.net reports citing Anadolu Agency.

“Turkey will continue to implement its own plans in the field and diplomacy until common sense prevails on the issue [of Eastern Mediterranean],” Recep Tayyip Erdogan said, following the Cabinet meeting in the capital Ankara.

“We are always here and ready to resolve conflicts through dialogue on equitable basis,” Erdogan added.

Erdogan also called on the Mediterranean countries to cooperate in finding “an acceptable formula that protects the rights of all.”

“No way Turkey would consent to any initiative trying to lock the country to its shores, ignoring the vast Turkish territory,” Erdogan said.

Last month, after Athens objected to Ankara's seismic survey in an area south of the island of Meis, or Kastellorizo, German diplomatic efforts helped defuse tension between Turkey and Greece.

But Greece’s controversial move last week to sign a maritime delimitation agreement with Egypt, which Turkey says violates its continental shelf and maritime rights, has further sparked tension between the two neighbors.

Turkey also announced on Monday that its seismic vessel Oruc Reis will conduct research in the region until Aug. 23.

Turkey has long contested the Greek Cypriot administration’s unilateral drilling in the Eastern Mediterranean, asserting that the Turkish Republic of Northern Cyprus (TRNC) also has rights to the resources in the area.