Armenia-Azerbaijan conflict must be resolved on the basis of the territorial integrity of Azerbaijan - President Ilham Aliyev
Read: 225

In 2018, Russia and Japan were closest to signing peace treaty
Read: 199 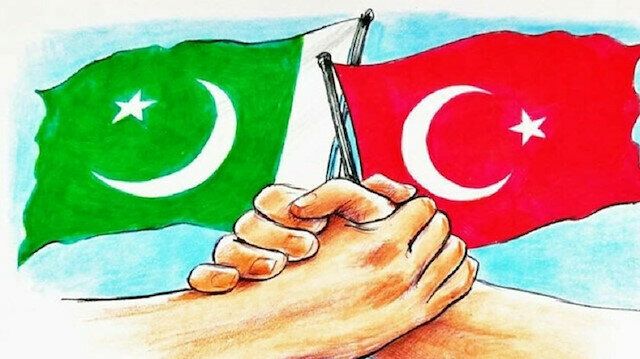 Tens of thousands of Pakistanis voiced their support for Turkey regarding the Eastern Mediterranean dispute on social media using the hashtag, "#Turkeyisnotalone", amid an escalating rift between Ankara and Greece over seismic exploration and drilling activities in the region, EDNews.net reports citing Yeni Safak.

As a sign of unity between the two brother countries, the hashtag "#Turkeyisnotalone" remained a top trend in Pakistan on the microblogging website on Wednesday.

Posting countless tweets and photos, Pakistanis expressed their solidarity with Turkey over mounting tensions in the Eastern Mediterranean.

"Pakistan and the Pakistani nation will never abandon Turkey and its nation in their tough time and we have a lot of examples in history. We are two countries, one nation; we are one soul, we are brothers. Pak-Turk dosti zindabaad," a Pakistani user said.

Another said, "An unbreakable bond of brotherhood; long live Pak-Turk friendship," highlighting the centuries-old bond of friendship between the two countries.

After the hashtag went viral on Twitter, Turks also took to social media to express their gratitude to their Pakistani brothers and sisters.

"Greetings to our real friend Pakistan that stands by our side today, as it did yesterday," said a Turkish social media user.

In the face of efforts by Greece, the Greek Cypriot administration and Egypt to limit Turkey into its mainland, Ankara has announced it would respond by continuing exploration activities in the Eastern Mediterranean with its seismic research vessel, the MTA Oruc Reis.

Turkey has accused Greece of trying to block it in the Aegean Sea and the Eastern Mediterranean by signing agreements with the Greek Cypriot administration, Egypt, and Israel.

But Greece's controversial move last week to sign a maritime delimitation agreement with Egypt, which Turkey says violates its continental shelf and maritime rights, has further sparked tensions between the two neighbors.

Turkey has long contested the Greek Cypriot administration's unilateral drilling in the Eastern Mediterranean, asserting that the Turkish Republic of Northern Cyprus (TRNC) also has rights to the resources in the area.