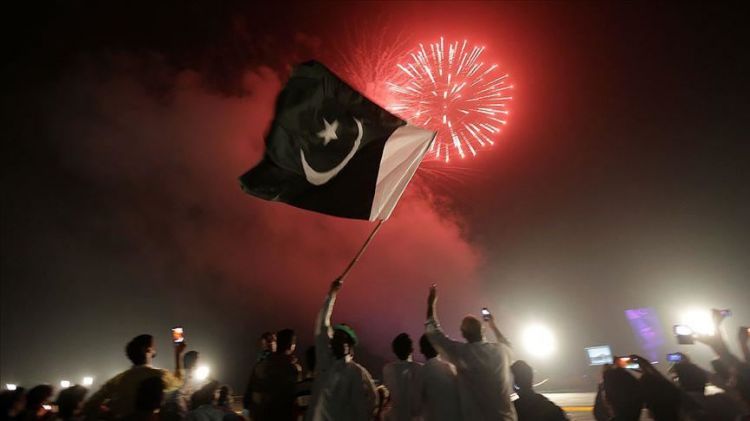 Rallies, flag-hoisting ceremonies and fireworks across the country marked the 74th Independence Day of Pakistan on Friday, amid a significant drop in the coronavirus casualties that have wreaked havoc on global lifestyle and economies, EDNews.net reports citing Anadolu Agency.

The day dawned with a 31-gun salute in capital Islamabad and a 21-gun salute in all the four provincial capitals, followed by change-of-guards ceremonies at the mausoleums of Quaid-e-Azam Mohammad Ali Jinnah, the founder of South Asian nation, in the port city of Karachi, and Allama Mohammad Iqbal, the national poet, in northeastern city of Lahore.

The main ceremony was held at the President Office where President Arif Alvi hoisted the national flag. Heads of the lower house National Assembly, and the upper house Senate, chiefs of the three armed forces, ministers, and senior government officials also attended the ceremony.

The highlight of the day was conferring the country's the highest civilian award, Nishan-e-Pakistan (Order of Pakistan) upon pro-freedom Kashmiri leader Syed Ali Geelani in recognition of his "unmatched freedom struggle against Indian occupation".

Kashmiri leaders based in Pakistan-administered Kashmir received the award on behalf of Geelani from President Alvi during the main flag hoisting ceremony at the president house.

The Himalayan region of Kashmir is held by India and Pakistan in parts, and claimed by both in full.

Alvi, in his address, reiterated his country's support to the "freedom" struggle of the people of Kashmir.

He also lauded the nation's fight against the COVID-19 pandemic, which has significantly been curbed in recent weeks. Currently, the country has around 17,000 active coronavirus cases, with 92% recoveries, according to the Health Ministry.

Prime Minister Imran Khan, in a series of tweets, paid tribute to "all those sons of the soil who laid their lives while defending and protecting territorial as well as ideological frontiers of the motherland."

Reaffirming Islamabad's support to Kashmiris' struggle for "self-determination", Khan said: "The nation's heart is profoundly grieved by the sufferings of our brethren in IIOJK (Illegally Indian Occupied Jammu and Kashmir), who are facing military siege since the past one year."