Azerbaijan has right to use its armed forces to take back its legally acknowledged territory - British journalist
Read: 684

EU moves toward Belarus sanctions after crackdown on protests 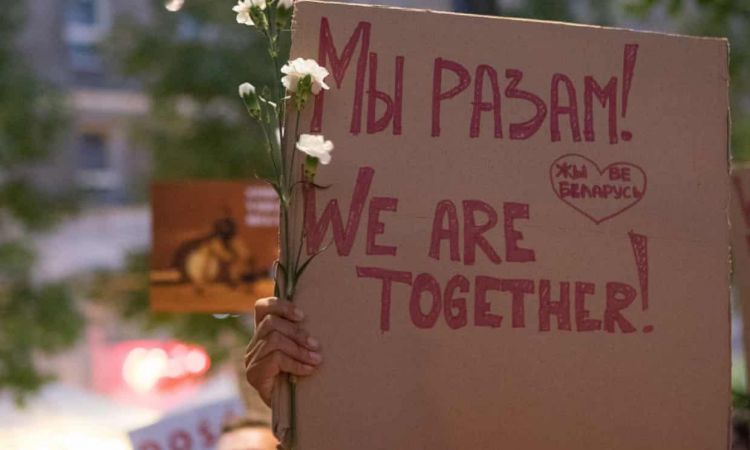 European Union foreign ministers have agreed to move toward imposing sanctions on Alexander Lukashenko’s regime, after reports of the systematic abuse and torture of Belarusians in the brutal crackdown on protests, EDNews.net reports citing The Guardian.

A diplomatic source said the EU’s 27 foreign ministers had agreed that individuals responsible for the falsification of Sunday’s presidential elections and subsequent violence against protesters should face asset freezes and travel bans into the bloc.

Officials will now draw up a list of names for a legal agreement, which could come into force in late August or September. “It was a surprising consensus,” the diplomat said, while pointing out the 27 still had to reach consensus on the names.

The ministers met in an emergency video meeting on Friday to discuss the disputed elections in Belarus, after a string of EU countries called for action against those responsible for the violence and arbitrary detention of protesters.
Before the meeting Poland, the Czech Republic, Estonia, Latvia, Lithuania and Denmark had called for “restrictive measures against officials” responsible for the election result, which gave Lukashenko 80% of the vote following a contest the EU said was “neither free nor fair”. Germany, Austria and Sweden had also voiced support for sanctions.

“We need additional sanctions against those who violated democratic values or abused human rights in Belarus,” the head of the EU executive, Ursula von der Leyen, tweeted on Friday. “I am confident today’s EU foreign ministers’ discussion will demonstrate our strong support for the rights of the people in Belarus to fundamental freedoms and democracy.”

The German foreign minister, Heiko Maas, said. “The brutality and the detention of peaceful protesters and journalists in Belarus isn’t acceptable in the Europe of the 21st century. This is why we have to increase the pressure on those in power there.”

EU sanctions must be agreed unanimously.

Hungary was considered the main obstacle to EU action after the country’s prime minister, Viktor Orbán, visited Minsk in June and called for existing EU sanctions to be dropped.

Hungary did voice caution over the proposed new sanctions, as did Austria and Greece, but they did not oppose the political decision to move in that direction.

Budapest had already backed an EU statement on Tuesday that threatened sanctions against those “responsible for the observed violence, unjustified arrests and falsification of election results”. Following talks with the Latvian foreign minister, Edgars Rinkēvičs, his Hungarian counterpart, Péter Szijjártó, said on Thursday that the two countries shared the same assessment of the situation.

EU sources suggested Hungary could exert influence in narrowing the number of individuals on the sanctions list.

The EU will also explore new funds to support civil society activists in Belarus, and a fact-finding mission to help mediate between the government and the opposition.

The British government has not revealed if it supports sanctions against Belarus, but under the terms of the Brexit transition the UK would have to enforce any EU measures that came into force before the end of the year.

The foreign office minister Wendy Morton described the violence as “appalling” and called on the Belarusian authorities to release “all those unjustly detained” and engage in dialogue with the opposition.

An EU spokesperson for foreign affairs and security said the bloc was “regularly in touch with its likeminded partners”, including the UK, on shared concerns and priorities, but added: “It remains to be seen if there will be a specific contact after [Friday’s foreign ministers] video conference.”

EU foreign ministers are expected to discuss how the EU could mediate between Lukashenko and protesters. Poland and the three Baltic states have called on the autocrat to “immediately initiate a dialogue with the Belarusian people”.

The EU lifted most sanctions against Belarus in 2016 as it sought a rapprochement with Lukashenko, who has maintained a strict rule over the country since 1994.

The decision to ease sanctions followed the release of political prisoners and a downturn in Minsk’s relations with the Kremlin, but one former presidential candidate, Andrei Sannikov, called it “a grave mistake”.

The EU retains both a ban on arms sales and sanctions on four individuals linked to the unsolved disappearances of opposition politicians, a journalist and businessman in 1999-2000.