"I can no longer see France, which shines in all its glory" - A moral lesson from a French Muslim woman to Macron
Read: 443

Azerbaijan's liberation of its own territories destroys the previous order in the South Caucasus - Expert
Read: 437

President spoke about how he proved to the world that Karabakh is our historical land in his address to the nation
Read: 348

"The beauty of Karabakh is felt when it is united with Azerbaijan" - Umud Mirzayev - VIDEO
Read: 318

Saudi Arabia, Bahrain to allow all Israeli flights to use airspace - Kushner 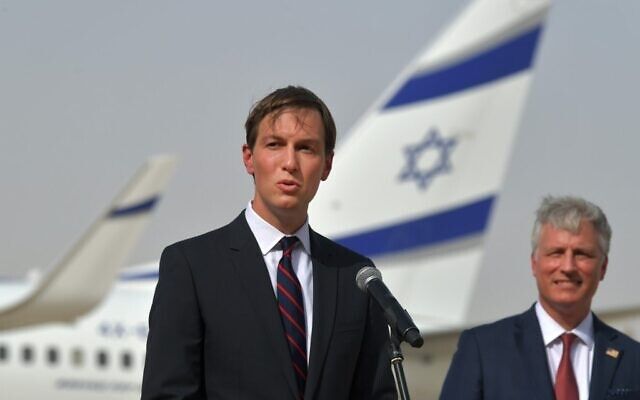 Saudi Arabia and Bahrain will allow all flights to and from Israel to use their airspace in a significant change of policy, senior White House adviser Jared Kushner said Wednesday, Times of Israel reports.

The two Gulf countries agreed last week to open their skies to Israeli flights to the United Arab Emirates following the announcement of the normalization deal between Jerusalem and Abu Dhabi.

However, Kushner told reporters, in a briefing ahead of a planned White House signing of the deal next week, that this would now include any and all Israeli flights to and from the East.

“They agreed to open their airspace not just to flights from Israel to the United Arab Emirates and back, but to all eastward travel,” Kushner said. “So when people make requests, they’ll grant those requests. That will save people a lot of time. That knocks down a barrier that’s been up for 72 years.”

Israeli airlines had been at a significant disadvantage in the past, being forced to take a detour of several hours skirting the Gulf and Iran on flights to the Far East. Saudi Arabia last year allowed Air India flights to Israel to use their airspace, but not El Al flights on the same route.

Allowing the use of Saudi and Bahraini airspace makes direct flights between Tel Aviv and the Emirates viable by cutting flying time from some seven hours to only three and a half hours.

Bahrain, like Saudi Arabia, has no official diplomatic relations with Israel, but their decision to allow overflights marks a sign of cooperation with the Jewish state.

Bahrain would only be on the flight path between Israel and the UAE if flights were allowed over Qatar, which has not signaled any willingness for warming ties with the Jewish state.

However, a decades old agreement gives Bahrain control of much of Qatar’s airspace, according to a report by Axios last week, meaning the move could potentially cut flying time by about 20 minutes.

On August 31, an Israeli El Al jet flew for the first time over Saudi Arabia to the UAE carrying a US-Israeli delegation led by Kushner to mark Abu Dhabi and Jerusalem agreeing to formalize their long-secret ties.

The United Arab Emirates and Israel are expected to sign the US-brokered accord, Israel’s first with a Gulf nation and only its third with an Arab state, at the White House on September 15.

US and Israeli officials have said other Arab states may follow the UAE’s lead to normalize ties with Israel.