Any attack by Iran against US will be met with attack '1,000 times greater in magnitude' - Trump | Eurasia Diary - ednews.net

Any attack by Iran against US will be met with attack '1,000 times greater in magnitude' - Trump 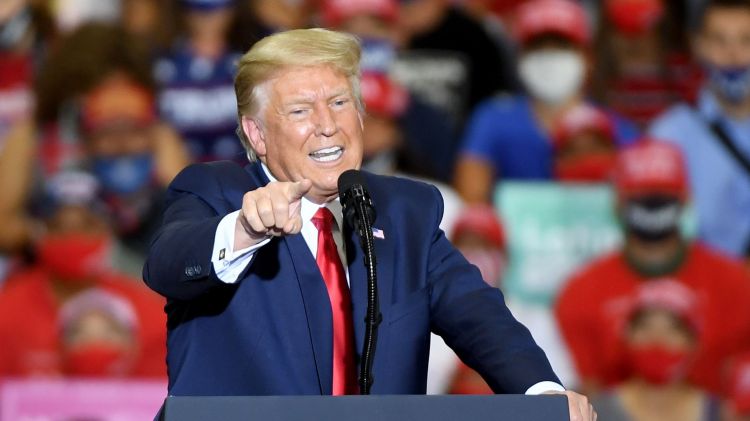 President Donald Trump has warned that any attack by Iran against the United States will be met with a response "that will be 1,000 times greater in magnitude," Sputnik reports.

Trump's statement came as he received reports on Tehran allegedly planning an assassination against the United States in retaliation for Gen. Soleimani, killed in a US targeted attack in January.

According to press reports, Iran may be planning an assassination, or other attack, against the United States in retaliation for the killing of terrorist leader Soleimani, which was carried out for his planning a future attack, murdering U.S. Troops, and the death & suffering...

Earlier on Sunday, reports emerged that Iran has been plotting an assassination of the US ambassador to South Africa in retaliation for assassinated General IRGC Quds Force Commander Qasem Soleimani.

On Monday, Iranian Foreign Ministry spokesman Saeed Khatibzadeh dismissed the allegations and urged US officials "to stop resorting to hackneyed and worn-out methods for anti-Iran propaganda in the international arena".

Khatibzadeh described the claims as part of the “Trump administration’s counter-intelligence campaign against Iran”, slamming the Politico report as “custom-ordered, biased and purposeful”.

The spokesman pointed out that it was “predictable” that Washington would “resort to anti-Iran accusations and falsification ahead of the US presidential election, coupled with that [American] regime’s pressures to abuse the United Nations Security Council’s mechanisms with the purpose of intensifying pressure on the people of Iran”

Soleimani was killed in a targeted US drone attack on the Baghdad International Airport on 3 January. Washington has justified the strike with claims that he had been planning to attack US personnel in the region and that by eliminating him, they have saved "a lot of lives".

Washington, however, failed to provide any evidence of the alleged attack plans. US Secretary of State Mike Pompeo said that the US possessed no information about the date and place of an alleged attack.

In retaliation for its top commander, Iran conducted a missile attack hitting the US Ayn al-Asad Air Base in western Iraq and American facilities in Erbil. No US personnel were injured in the attack, the White House said.

Soleimani was a highly respected figure in Iran, praised for battling terrorist groups in the conflict regions and considered an "architect" of the Iranian security infrastructure.