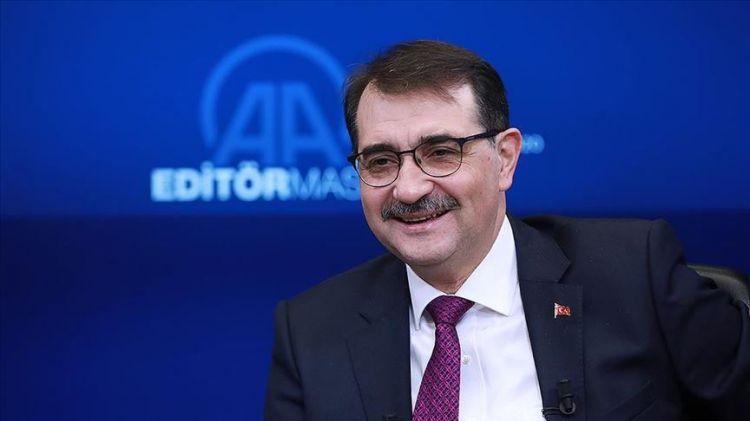 Speaking during an exclusive interview with Anadolu Agency's Editors' Desk, Donmez highlighted the recent positive developments of the country's exploration and drilling activities in the ultra-deep water Sakarya gas field in the Black Sea, which the Fatih drillship discovered after just one month of drilling.

"There is a high possibility that the current reserve amount of 320 bcm [billion cubic meters] will be revised upwards following the completion of test drills and surveys," Donmez said.

Donmez revealed that the target is to connect the discovered gas to the national gas transmission network by 2023, which according to the ministry’s estimations will provide cheaper gas than the prices charged for Turkey’s current gas imports.

The discovery is set to decrease the country’s oil and gas dependence on foreign sources, which is part of its national plan to shed reliance on energy imports while also raising hopes that it will get discounts on gas imports currently under negotiation.

“It is extremely important for a strong Turkish economy,” Donmez said.

As part of the country’s plan towards more energy self-determination, Donmez explained that Turkey has developed resources to support its energy supply security and meet nearly 45-50 billion cubic meters of annual consumption through its LNG and Floating Storage Regasification Unit (FSRU) terminals.

According to Donmez, the engineering studies for the Black Sea gas find are planned for completion by mid-October, of which the findings will then be shared with the public.

On Aug. 21, President Recep Tayyip Erdogan announced the discovery of 320 billion cubic meters of natural gas reserves in the Tuna-1 well at the Sakarya gas field, located around 170 kilometers off the Black Sea coast.

According to the Energy Market Regulatory Authority's (EMRA) data, the majority of Turkey's gas imports at 33.6% came from Russia last year, followed by Azerbaijan and Iran with 21.2% and 17.1% respectively.

The country, in conjunction with receiving imported pipeline gas from three countries under long-term purchase agreements, also imports gas in the form of LNG from Algeria and Nigeria under long-term LNG contracts and spot LNG from different countries, including Qatar and the US.