Azerbaijan's liberation of its own territories destroys the previous order in the South Caucasus - Expert
Read: 428

"I can no longer see France, which shines in all its glory" - A moral lesson from a French Muslim woman to Macron
Read: 423

President spoke about how he proved to the world that Karabakh is our historical land in his address to the nation
Read: 341

"The beauty of Karabakh is felt when it is united with Azerbaijan" - Umud Mirzayev - VIDEO
Read: 310

Turkey to continue supporting Baku 'with all means' 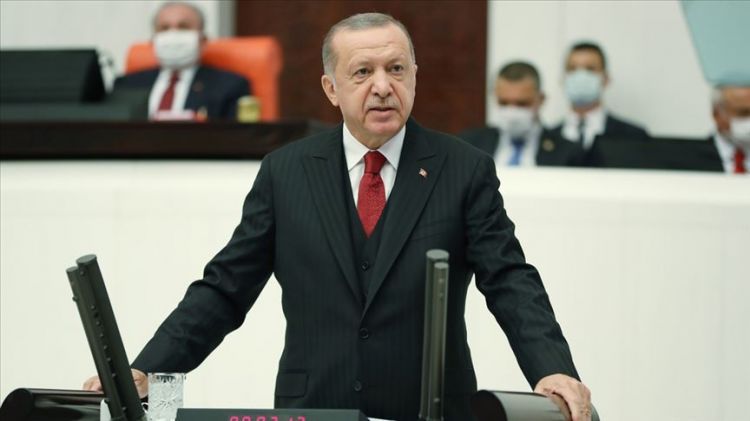 Turkey will continue to support Azerbaijan with all means in its conflict with Armenia over occupied Upper Karabakh, the Turkish president said on Thursday, Anadolu Agency reports.

"As Turkey, we will continue to support our Azerbaijani brothers with all means and with all our heart, in line with the principle of 'two states, one nation,'" President Recep Tayyip Erdogan said during his speech at the opening of the Turkish parliament's fourth legislative session of its 27th term in the capital Ankara.

Erdogan noted that permanent peace could only be achieved in the region "if Armenia withdraws from occupied Azerbaijani territories."

He warned countries supporting "rogue state" Armenia in its occupation of Upper Karabakh would "answer to the common conscience."

Azerbaijan's parliament declared a state of war in some of its cities and regions following Armenia's border violations and attacks in the occupied Upper Karabakh, also known as Nagorno-Karabakh, region.

On Monday, Azerbaijan declared partial military mobilization amid the clashes.