The desecration of Azerbaijani historical buildings and cemeteries is indicative of Armenian hatred - British Journalist
Read: 393 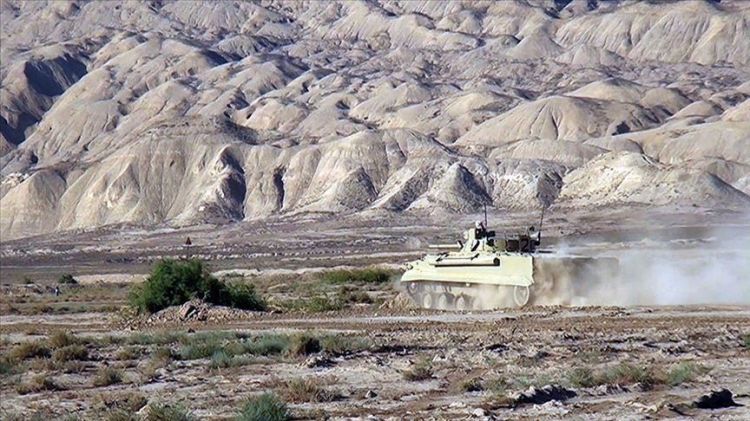 The Azerbaijani army thwarted Armenian attacks conducted in violation of a cease-fire aimed at recapturing former's military positions, the Defense Ministry of Azerbaijan said in a statement on Monday, Anadolu Agency reports.

Small groups of Armenian forces performed their attacks in the direction of Agdere, Agdam, Fuzuli, and Cebrail, according to the statement.

Azerbaijan neutralized many Armenian soldiers, and destroyed a T-72 battle tank and three Grad missiles, adding Armenian artillery units withdrew and some of its personnel fled after leaving military vehicles behind, the ministry noted.

Armenia opened fire on Azerbaijan’s Agdam, Terter, and Goranboy provinces populated by civilians, the ministry said in a separate statement.

The ministry also noted that a total of three Armenian drones were downed by Azerbaijani forces, two in direction of Tovuz region near the borderline earlier and another one around Agdam region Monday morning.

It added that Armenia was spreading false information by saying Azerbaijan was preparing military build-ups to gain control of Hadrut where intense clashes were allegedly going on, and that this region had already been liberated by the Azerbaijani forces.

The Azerbaijani army acts in compliance with the cease-fire and does not actively hold any war activities, it stressed.

Following meetings in Moscow on Oct. 10, Azerbaijan and Armenia agreed on a humanitarian cease-fire so that conflicting sides could retrieve bodies left on the battlefield in Nagorno-Karabakh and hold prisoner exchange.

The clashes began on Sept. 27, when Armenian forces targeted civilian Azerbaijani settlements and military positions in the region, leading to casualties.

Relations between the two former Soviet republics have been tense since 1991 when the Armenian military occupied Nagorno Karabakh.

Some 20% of Azerbaijan's territory has remained under illegal Armenian occupation for some three decades.

Four UN Security Council and two UN General Assembly resolutions, as well as many international organizations, demand the withdrawal of the occupying forces.

The OSCE Minsk Group -- co-chaired by France, Russia, and the US -- was formed in 1992 to find a peaceful solution to the conflict, but to no avail. A cease-fire, however, was agreed to in 1994.

Many world powers, including Russia, France, and the US, have urged a new cease-fire. Turkey, meanwhile, has supported Baku’s right to self-defense and demanded the withdrawal of Armenia’s occupying forces.