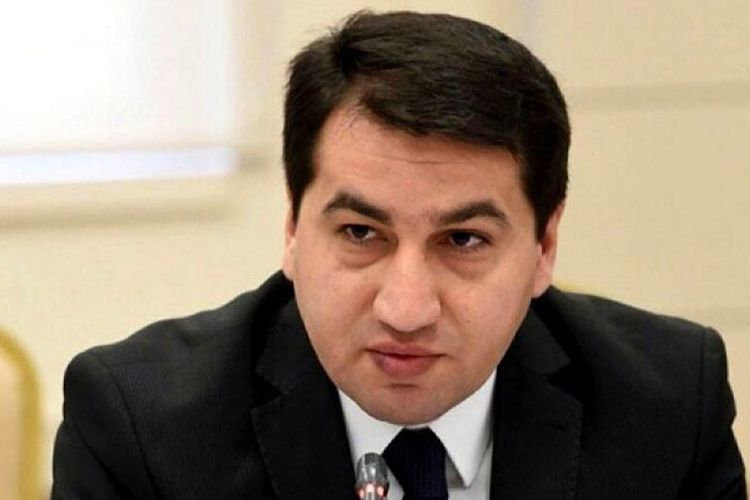 Azerbaijan’s armed forces have destroyed  ballistic missiles of Armenia ready for the start of launch, averting Armenia’s yet another attack on civilians, Presidential Aide Hikmat Hajiyev said in a Twitter post on October 14, Azerinews reports/.

“Yet another deliberate and targeted human catastrophy planned by Armenia was averted. Ballistic missiles of Armenia were destroyed in start position in border area of occupied Kalabajar region of Azerbaijan with Armenia. Lives of many civilians were saved,” Hajiyev twitted.

“Armenia intended to attack civilians and critical infrastructure in Ganja, Mingachevir and other cities with ballistic missiles. Launch area was empty field. No civil/military infrastructure,” Hajiyev said in another tweet.

Armenia launched an overnight missile attack on October 11 at apartment buildings in the central part of Ganja, the second largest city of Azerbaijan, located far from the frontline.

Ten civilians, including four children, were killed in the attack, while 10 apartment buildings and above 100 different facilities were severely damaged.

The attack on Ganja comes hours after the humanitarian ceasefire signed between Azerbaijani and Armenian Foreign Ministers with Russia's mediation on October 10. Ganja also came under Armenian missile attack on October 4 as one civilian was killed and several others were injured.

Armenia has launched missile attacks targetting civilians in Azerbaijan shortly after it resumed attacks near occupied Nagorno-Karbakh region on September 27.

Azerbaijan's other densely populated areas, including Khizi and Absheron near Baku have also been subjected to missile attacks. Armenia forces have also thrown missiles at Azerbaijan's industrial Minghachevir city that houses a large water reservoir and a hydroelectric power station as well as Baku-Tbilisi-Ceyhan pipeline that takes Azerbaijani oil to European markets.

Armenian armed forces launched a large-scale operation in the front-line zone on September 27 at 6 am, shelling the positions of the Azerbaijani army from large-calibre weapons, mortars, and artillery installations of various calibres.

The Azerbaijani Army responded by counteroffensive to retake Azerbaijan's occupied territories. So far, a number of strategic heights, Madagiz village, Hadrut town a number of villages have been liberated from the Armenian occupation.