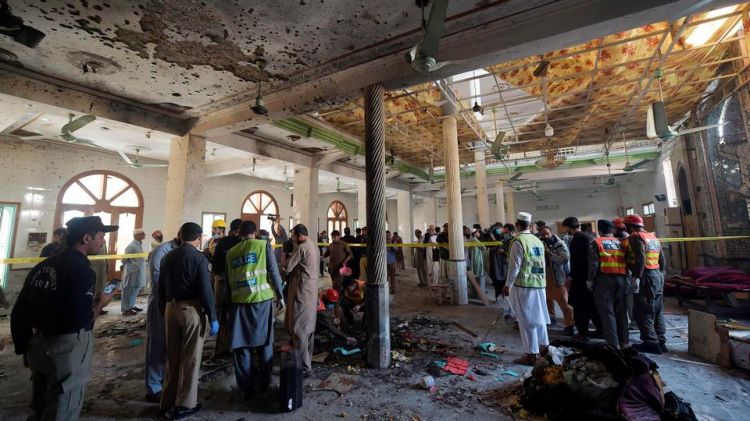 At least seven students have been killed and some 50 people wounded in a blast that officials say occurred after suspects planted explosives inside a seminary in Peshawar early in the morning​, Eurasia Diary reports citing TRT World.

A bomb blast at a religious seminary in the Pakistani city of Peshawar has killed at least seven students and wounded scores more.

"Unidentified people planted explosives in a plastic bag," said a police officer in the northwestern city who declined to be identified as he is not authorised to speak to media.

More than 60 people had been taking a lesson when the explosion tore through the Jamia Zuberia seminary in Peshawar, about 170 kilometres (around 100 miles) west of Islamabad, said Waqar Azim, a senior police official.

"The blast took place in a seminary during a Quran class. Someone took a bag inside the seminary," Azim said.

He added that the person who had brought in the bag left the lecture hall before the blast at the seminary.

Mohammad Ali Gandapur, another senior police official, said at least seven people had been killed with more than 50 wounded.

The death toll was confirmed by Mohammad Asim Khan, a spokesman at a local hospital, who said that seven bodies and 70 wounded people had been taken to the facility.

"Most of those killed and injured were hit by ball bearings and some were badly burnt," he said.

All of the dead were men aged between 20 and 40, he said. Teachers and boys as young as seven were among the wounded.

Teacher Safiullah Khan said more than 1,000 students are currently enrolled at the religious school, which is divided into two sections – one for students aged 18 and older and the other for children.

"The blast took place in the section where students above the age of 18 were taking a class," Khan said, adding that the wall between the two sections collapsed in the blast.

A live stream of the lesson showed a religious teacher speaking in Pashto and Arabic, explaining a saying from the Prophet Muhammad when the explosion took place.
Shortly afterwards, rescue workers and locals were seen scouring the site and collecting students' books, caps and shoes.
In a tweet, Prime Minister Imran Khan offered his condolences.

"I want to assure my nation we will ensure the terrorists responsible for this cowardly barbaric attack are brought to justice asap," Khan wrote.