Today is the 97 years of anniversary of Turkey Republic | Eurasia Diary - ednews.net

Today is the 97 years of anniversary of Turkey Republic 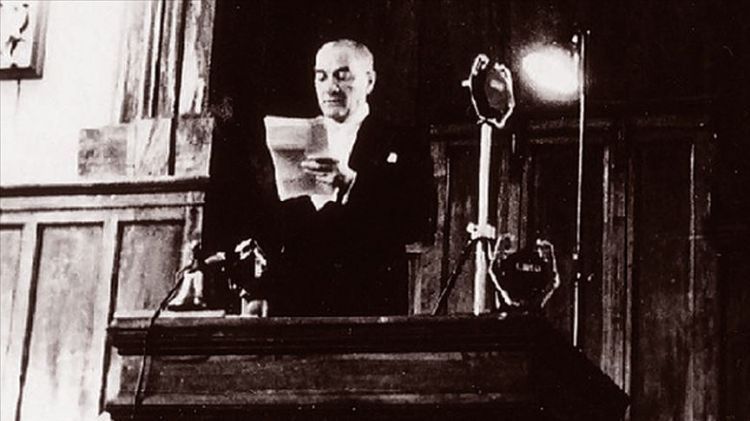 Today is the 97 years of anniversary of Turkey Republic.

After the National Struggle, the great leader Mustafa Kemal Ataturk established the current Turkish Republic. On October 25, 1923, the government resigned and Ataturk had an opportunity to form a new government. On October 28, Ataturk told his comrades in Chankaya that "tomorrow we will declare a republic." On October 29, 1923, the Assembly convened under the chairmanship of Ismet Inonu. The following verdicts were announced in the Assembly:

"Independence unconditionally belongs to the nation. The management of public affairs rests with the people. The Turkish state is a republic.
The religion of the Turkish state is Islam, the official language is Turkish.
The Turkish state is governed by the Grand National Assembly.
The President of Turkey is elected by the National Council in a legislative session among the members of the General Assembly. He remains in charge until his successor is elected. The former president can be re-elected.
The President of Turkey is the head of state of Turkey. In this capacity, he presides over the Grand National Assembly and the Cabinet of Ministers when necessary.
The head of the Cabinet is elected by the President and members of the Assembly. Other ministers are still elected by the Cabinet of Ministers from among the deputies. The list of the Cabinet of Ministers is submitted by the President to the Parliament for approval."
Following the talks, the Republic of Turkey was proclaimed at 20:30 with the votes and applause "Long live the Republic". Mustafa Kemal Ataturk, who was elected the first President of the Republic of Turkey, expressed the following words at that time:
"We will always move forward together, based on the love and trust of the nation. The Republic of Turkey will be happy, successful and victorious. "
The President of Turkey is Recep Tayyip Erdogan and the total population is 84,339,067.
At present, the Turkish state has become one of the main powers in the region. With its economic, political and military potential, the solution of every problem in the region is impossible without its participation.: