Space hurricane which rains electrons instead of water discovered by scientists
Read: 1305 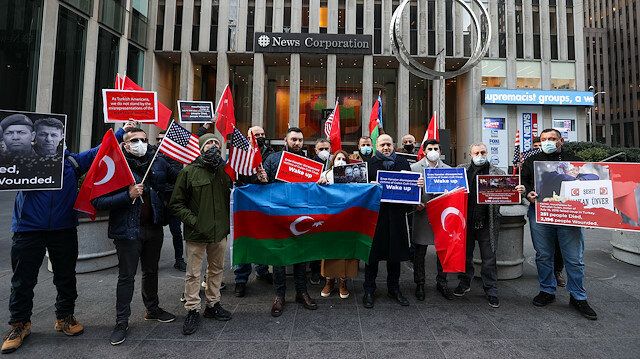 A group of Turks protested outside the New York City office of The Wall Street Journal newspaper Thursday for publishing an article by a basketball player linked to a terrorist group, Yeni Safak reports.

In the opinion piece titled "Turkish Democracy Isn’t a Lost Cause," Enes Kanter, a supporter of the Fetullah Terrorist Organization (FETO), accused Turkey of being an "autocracy" and praised US sanctions on the country over Ankara's purchase of a Russian defense system.

In his article, Kanter, the so-called adopted son of Fetullah Gulen, who is the mastermind of a 2016 coup attempt in Turkey, insults Turkish democracy and President Recep Tayyip Erdogan.

In August 2016, Kanter tweeted that he would sacrifice his mother and father for Gulen, sparking controversy among his fans and Turkish people.

"We are here today to condemn The Wall Street Journal for giving an opportunity to Enes Kanter who spoke against Turkey and its democracy," Halil Mutlu, co-chair of the Turkish American National Steering Committee (TASC), said in front of the newspaper’s office.

"Enes Kanter has gone beyond being a supporter of a terror leader and has now become a tin soldier. He has been exploiting the sports community as a platform to this end. He has added Wall Street, too," said Mutlu.

The Journal also drew criticism from the Turkish embassy in Washington, D.C., with the mission recalling that FETO bombed the Turkish parliament.

"FETO putschists, who Enes Kanter supports and advocates for, bombed the Turkish Parliament, killed 251 innocent civilians and injured more than 2,000 in an attempt to overthrow the democratically elected government on July 15, 2016," the embassy said Monday on Twitter.

TASC asked the Journal to publish an opinion piece it had written against the one Kanter filed, but the newspaper has yet to do so, according to Mutlu.

The protestors carried Turkish and Azerbaijani flags as well as banners that gave the number of casualties during the defeated coup attempt.

Turkey also accuses FETO of being behind a long-running campaign to overthrow the state through the infiltration of Turkish institutions, particularly the military, police and judiciary.

Gulen has lived in self-exile in the state of Pennsylvania since 1999.