Rescuers retrieve more bodies from rubble of homes and buildings toppled by 6.2 magnitude earthquake, as military clears roads in hardest-hit city of Mamuju and Majene district on Sulawesi island. 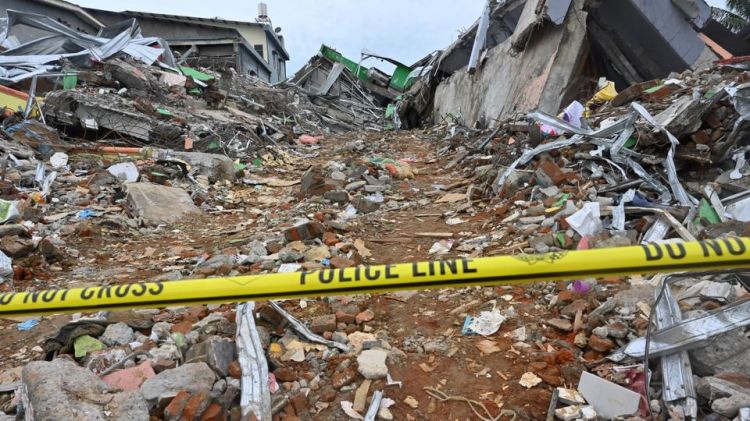 Indonesian rescuers have retrieved more bodies from the rubble of homes and buildings toppled by a 6.2 magnitude earthquake, raising the death toll to 56, while military engineers managed to reopen ruptured roads to clear access for relief goods.
More heavy equipment reached the hardest-hit city of Mamuju and the neighboring district of Majene on Sulawesi island, where the quake hit Friday night, said Raditya Jati, the National Disaster Mitigation Agency’s spokesperson, on Sunday.
Eurasia Diary reports citing TRT World that power supply and phone communications also began to improve.
Thousands were left homeless and more than 800 have been injured, more than half still receiving treatment for serious injuries, Jati said. A total of 47 people died in Mamuju and nine in Majene.
The quake's epicentre was 36 kilometres south of Mamuju and it had a relatively shallow depth of 18 kilometres.
Devastation site
Jati said at least 415 houses in Majene were damaged and about 15,000 people were moved to shelters. The agency is still collecting data from the area.
Mamuju, the provincial capital of nearly 300,000 people, was strewn with debris from collapsed buildings.
The governor's office building was almost flattened by the quake and a shopping mall reduced to a crumpled hulk. Two hospitals were damaged.
The disaster agency said the army corps of engineers cleared the road connecting Mamuju and Majene that was blocked by landslides. They also rebuilt a damaged bridge.
Aerial images from the devastated seaside city showed buildings reduced to a tangled mass of twisted metal and chunks of concrete, including the regional governor's office.
It was unclear how many more bodies could be under the debris, or if there was anyone still trapped but alive more than two days after the disaster.
Authorities have not given a figure for how many survivors have been rescued.
A pair of young sisters plucked from under the mass of concrete and other debris were treated in hospital.
Fear of tsunami
The thousands left homeless by the quake took to makeshift shelters, many little more than tarpaulin-covered tents filled with whole families, that were lashed by heavy monsoon downpours.
They said they were running low on food, blankets, and other aid, as emergency supplies were rushed to the hard-hit region.
Many survivors are unable to return to their destroyed homes or were too scared to go back fearing a tsunami sparked by aftershocks, which are common after strong earthquakes.
"It's better to take shelter before something worse happens," said Mamuju resident Abdul Wahab, who took refuge in a tent with his wife and four kids, including a baby.
"We hope the government can deliver aid soon like food, medicine, and milk for the children," he added.
Worried about an outbreak of Covid-19 in the crowded camps, authorities said they are trying to separate high- and lower-risk groups.
Heavy flooding and landslides
In neighbouring Kalimantan, Indonesia's section of Borneo island, at least five people had died in heavy flooding while dozens more were missing, according to reports, while floods have killed at least five people in Manado, hundreds of kilometres north of the quake disaster in Sulawesi.
Landslides in West Java killed at least 28 this week as the rainy season heaps misery on parts of the sprawling nation.
At the eastern end of Java island, rumbling Mount Semeru erupted late on Saturday, shooting a plume of ash and debris some 4.5 kilometres into the sky, as bright red lava flowed down its crater.
There were no immediate reports of casualties.
String of disasters
Many on Sulawesi island are still haunted by a magnitude 7.5 earthquake that devastated Palu city in 2018 and set off a tsunami that caused the soil to collapse in a phenomenon called liquefaction.
More than 4,000 people were killed, including many who were buried when whole neighborhoods were swallowed in the falling ground.
Indonesia, home to more than 260 million people, is frequently hit by earthquakes, volcanic eruptions, and tsunamis because of its location on the "Ring of Fire," an arc of volcanoes and fault lines in the Pacific Basin.
A massive magnitude 9.1 earthquake off Sumatra island in western Indonesia in December 2004 triggered a tsunami that killed 230,000 people in a dozen countries.