Apophis meteor will gently pass by Earth tonight - experts warn it could collide with our planet in future
Read: 5956

Europe concerned over detention of protesters in Russia 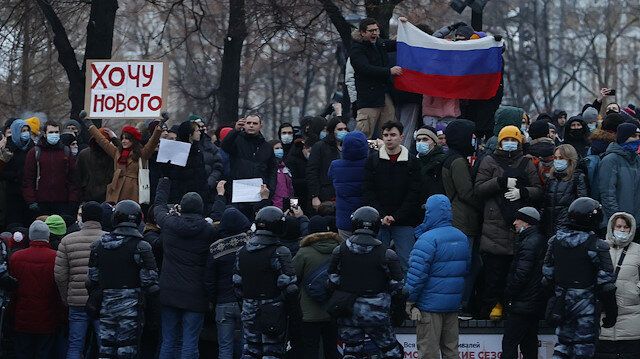 The EU and European countries on Saturday raised their concern over the detention of people in Russia protesting the arrest of Russian opposition politician Alexey Navalny, Yeni Safak reports.

Tens of thousands of people on Saturday gathered in Russia to protest Navalny’s detention, demanding his immediate release.

Many people supporting Navalny were detained in the country while police intervened the protestors harshly.

Borrell said the EU foreign ministers will discuss “next steps” on the issue at the Foreign Affairs Council on Monday.

UK’s Foreign, Commonwealth and Development Office also raised concern over “the detention of peaceful protesters and continue to monitor the situation closely.”

“We urge the Russian government to respect and comply with its international commitments on human rights, and release citizens detained during peaceful demonstrations,” the statement said.

Navalny’s wife Yulia Navalnaya was also held by the police on Saturday protests, she posted on Instagram.

Navalnaya posted a photo of herself with the caption “Sorry for the poor quality. Very bad light in the police van."

Kremlin spokesman Dmitry Peskov said Friday that attempts to organize unauthorized rallies and incite young people to participate in them is “unacceptable”.

“The only appropriate stance is in favor of abiding by the law and against the organization of unauthorized activities, let alone attempts to incite young people and children to take part in them," he told reporters.