daily news
Armenian actions in liberated territories are inhumane - Turkish ambassador
The war has already ended, it is time to prepare for peace and cooperation in the region - Ambassador
US Secretary of State held telephone talks with Pashinan
Moscow calls for a meeting on US return to JCPOA
Attacking light helicopters will launch kamikaze drones
Iran, Iraq confer on expansion of transportation coop.
Leader of Israel's largest opposition party reluctant to join Netanyahu's government
Azerbaijani economy to grow by 2 % this year - IMF
﻿

Apophis meteor will gently pass by Earth tonight - experts warn it could collide with our planet in future
Read: 4533

Not a single Armenian will live in Karabakh - Time is in our favour
Read: 283 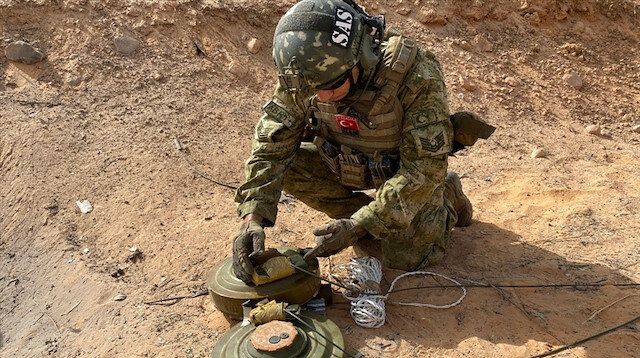 According to a statement by the Turkish National Defense Ministry, Turkish Air Forces' Explosive Ordnance Disposal teams continue their work in Libya as part of military training and cooperation arrangements between the two countries.

The EOD teams ensure the safety of Libyans, the press release said.

The North African country has been torn by a civil war since the ouster of late ruler Muammar Gaddafi in 2011.

The rival sides – the UN-recognized Government of National Accord and warlord Khalifa Haftar – reached a countrywide permanent cease-fire last October. International efforts for a permanent political settlement, however, are still underway.