Wrongful death claim in US after police kneel on neck | Eurasia Diary - ednews.net

daily news
Syria's Idlib de-escalation zone shelled 33 times in past day
Iran nuclear negotiator rejects interim agreement
Czechs ask EU and NATO to expel Russian diplomats in solidarity against Moscow
Liberation of the rest of territories is inevitable - It will only take some time – Political analyst
Ilham Aliyev approved agreement between Azerbaijan and Pakistan
US sends military supplies to its base in YPG-held region in Syria
Iran has $2.5b trade exchanges with Caspian Sea countries
Israeli journalists visit Azerbaijan’s Aghdam district
﻿

Wrongful death claim in US after police kneel on neck 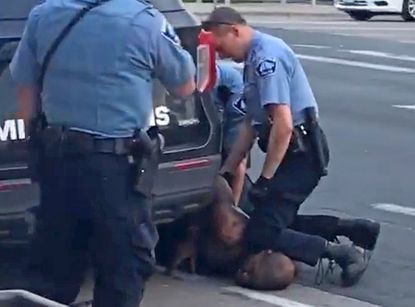 A man in Northern California lost his life Tuesday three days after police officers kneeled on the back of his neck for five minutes to subdue him, triggering a wrongful death claim, according to local reports. Eurasia Diary reports citing Anadolu Agency.
Isabella Collins, the sister of Angelo Quinto, had called police on Dec. 23 to their home in Antioch, California in fear that he would hurt their mother, according to family lawyer John L. Burris.
Before the police's arrival, Quinto's mother was holding her son to her chest to calm him down, as he was having a mental health episode.
When two officers from the Antioch Police Department arrived on the scene, they did not try to assess the situation but immediately grabbed Quinto from his mother's arms, put his on the ground, and kneeled on the back of his neck for approximately five minutes, said the reports.
Quinto, 30, lost consciousness and was taken to a local hospital where he was declared dead three days later, Burris said.
He has suffered from "anxiety, depression, and paranoia for the previous few months," Burris said in a wrongful death claim against Antioch police filed on Feb. 18.
Most of the event was recorded by Collins on her cellphone and posted on YouTube, where the police actions came under fierce criticism.
Despite almost two months since Quinto's death, police have not issued an official statement on the incident.