Iran says not behind blast on Israeli-owned ship 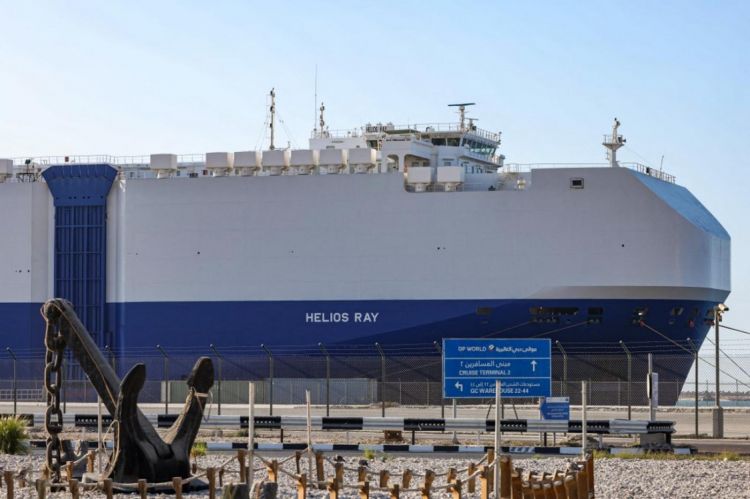 Iran strongly rejects Israel's claim that Tehran was behind a blast aboard an Israeli-owned ship in the Gulf of Oman last week, an Iranian foreign ministry spokesman said in a televised news conference on Monday.
"We strongly reject this accusation... the security of the Persian Gulf is extremely important for Iran," Saeed Khatibzadeh said.
The remarks come hours after Israeli Prime Minister Benjamin Netanyahu blamed Iran for a blast aboard the MV Helios Ray, a vehicle-carrier ship, but sidestepped a question on whether Israel would retaliate.
The MV Helios Ray was hit between Thursday and Friday morning by a blast above the water line that a US official said ripped holes in both sides of its hull.
The blue-and-white vessel on Sunday arrived at Dubai's Port Rashid, where a spokesperson for DP World said an assessment can be made.
An Israeli delegation was also en route to Dubai to investigate further, Israeli Channel 13 reported on Saturday.
The ship is owned by a Tel Aviv company, Ray Shipping, through a company registered in the Isle of Man, according to a UN shipping database.
Israeli Channel 13 News said defence officials believed the Iranian navy had launched a precision strike to avoid casualties, firing two missiles at a part of the ship that if damaged would not have sunk the vessel.
"This was indeed an operation by Iran. That is clear," Netanyahu told Kan radio.
Asked if Israel would retaliate, he repeated previous statements about his determination to prevent Iran from developing nuclear capacity and added: "We are striking at it (Iran) all over the region."
Tehran has not commented on the incident nor responded to earlier Israeli accusations that it might have been involved.
Kan said the Netanyahu interview was pre-recorded on Sunday night, before Syria accused Israel of carrying out missile strikes around southern Damascus.
Israel did not confirm carrying out those strikes, but has previously said it was launching frequent military actions against Iranian deployment or arms handovers within Syria.
These latest attacks come as the administration of US President Joe Biden attempts to reverse policies set out by his predecessor, Donald Trump, that led to the US withdrawing from a nuclear deal between Iran and other major powers.
Trump had reimposed sanctions on Tehran and blamed Iran for attacks on other ships in Gulf waters, notably two vessels carrying two Saudi oil tankers in May 2019. Iran has denied carrying out the attacks.