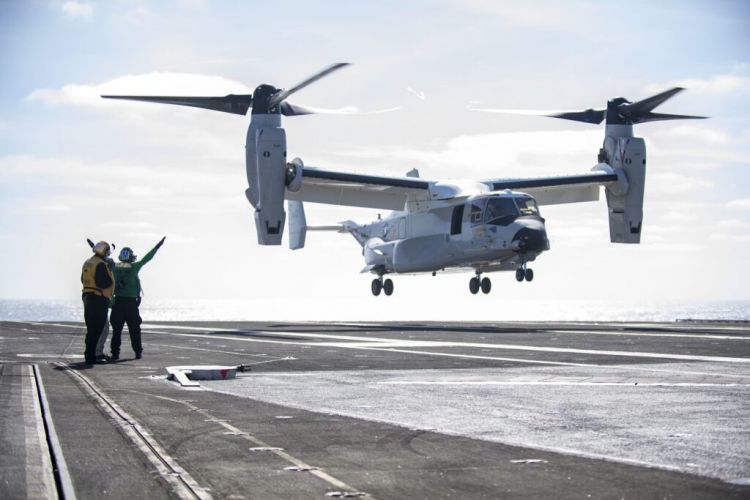 The U.S. Navy has awarded Bell-Boeing Joint Project Office a $309.5 million contract to produce additional CMV-22B Osprey aircraft, according to the U.S. Department of Defense contract announcements.
The contract modification award from Naval Air Systems Command enables the company to provides manufacture and delivery of four CMV-22B multi-engine, dual-piloted, self-deployable, medium lift, vertical takeoff and landing (VTOL) tilt-rotor aircraft for the Navy.
The CMV-22B is the U.S. Navy version of the Osprey, which is an adaptation of the MV-22B used by the U.S. Marine Corps.
The Navy will use the CMV-22B to replace the venerable C-2A Greyhound for transporting personnel and cargo from shore to aircraft carriers.
Compared to the C-2A, the CMV-22B offers increased operational range – capable of transporting cargo and passengers as far as 1,150 nautical miles, increased survivability, enhanced beyond-line-of-sight communications, greater cargo capacity, and faster cargo loading/unloading.
It is the only aircraft that can land on the flight deck of an aircraft carrier with the F-35C engine power module safely secured inside its fuselage and provide roll-on/roll-off delivery.
The V-22 is the world’s first production tilt rotor aircraft. The first flight having occurred in March 1989.