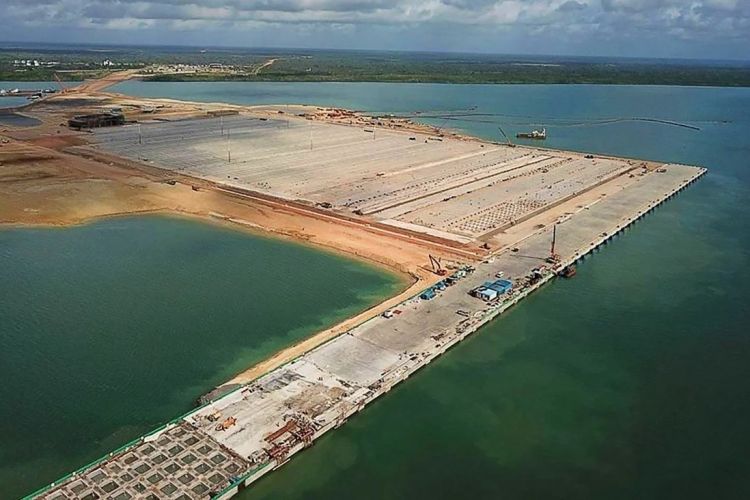 A seaport built by a Chinese company on the Kenyan island of Lamu will go into operation in June as Beijing aims to recreate an ancient Silk Road more than 600 years after Ming dynasty admiral Zheng He visited the area.

According to historians, Zheng’s fleet paid four visits to the Kenyan coast, starting at the town of Malindi in 1418. Centuries later, China is trying to connect this history with several projects in Africa.

The Kenya Ports Authority (KPA) said China Communications Construction Company had completed construction of the first three berths at Lamu port, which is set to become a cargo transshipment hub for containers and oil cargo. The deepwater facility will be capable of handling large sea vessels and will complement Kenya’s main port in Mombasa.

The US$5 billion project is part of a broader US$25 billion infrastructure scheme – the Lamu Port South Sudan Ethiopia Transport (Lapsset) Corridor – which will link Kenya with Ethiopia, Uganda and South Sudan.

Ports operator China Merchants Group (CMG) has made massive investments and signed concessions in Djibouti, Nigeria and Togo, according to The Economist Intelligence Unit. In December, it signed a US$350 million investment deal with state-owned company Great Horn Investment Holding, paving the way for a revamp of the Port of Djibouti into an international logistics and business hub. The US$3 billion project is to be modelled on the port of Shekou in the south China city of Shenzhen that is integrated with a free-trade zone and business centre.

But CMG’s presence in the country has not been without controversy. It was sold a stake in the Doraleh container terminal after the Djiboutian government in 2018 seized control of the terminal and transferred concession staff and assets to Societe de Gestion du Terminal, a public company set up to manage the terminal.

Dubai-based DP World, which had operated the terminal, challenged the move in courts in Hong Kong and London – a legal dispute that is ongoing – claiming it was forced out to allow CMG to take over.

Analysts at The Economist Intelligence Unit said “the investments (including a railway to Ethiopia and a Chinese naval base) are not surprising, given Djibouti’s importance as a transshipment hub on the BRI-linked Maritime Silk Road, as well as its potential as a commercial hub for access to other parts of Africa, and its strategic location as a security node for busy shipping lanes passing through the Gulf of Aden and the Red Sea”.

The analysts listed other ongoing or recently completed port development projects involving Chinese finance and construction linked to the Belt and Road Initiative, including major seaports at Abidjan in the Ivory Coast, Tema in Ghana, Lekki in Nigeria, Kribi in Cameroon, Dar es Salaam in Tanzania, Mombasa in Kenya, and Abukir, Alexandria and El Dekheila in Egypt.

A study by the Centre for Strategic and International Studies in 2019 identified 46 sub-Saharan African ports with financial, construction, or operational involvement by Chinese entities. It said that “forming the backbone of China’s ‘Maritime Silk Road’, investments in African ports provide a gateway to the region’s trade and economic development, empower China with political leverage and clout on the continent, and provide a foothold for People’s Liberation Army Navy activities”.

China set up a military base in Djibouti in 2017. Djibouti also hosts US, French and Japanese bases.