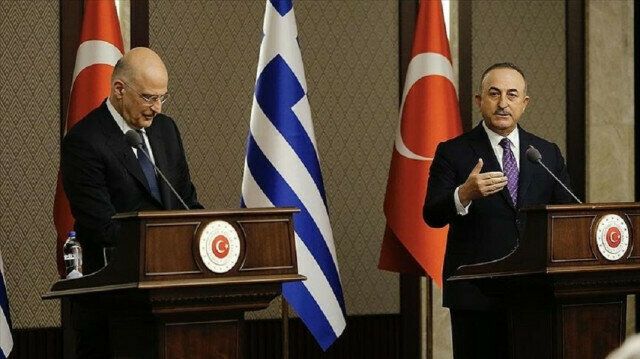 Nikos Dendias' "extremely bigoted accusations against our nation" last week will stand out in diplomatic history as an example of lack of propriety, Omer Celik, spokesman for the Justice and Development (AK) Party, told reporters in the capital Ankara after a meeting of the party's Central Executive Board.

Dendias made the accusatory remarks at a press conference with Mevlut Cavusoglu, Turkey's foreign minister, during a visit to Turkey last week. Cavusoglu immediately lashed out at the remarks, saying Dendias had crossed the line by making "unacceptable accusations," spoiling the visit's "positive tone."

On Saturday, the Turkish Coast Guard Command said on its website that coast guard teams were dispatched to rescue 41 asylum seekers off Izmir, including one with a burn on his leg.

Turkey and human rights groups have repeatedly condemned Greece's illegal practice of pushing back asylum seekers, saying it violates humanitarian values and international law by endangering the lives of vulnerable migrants, including women and children.

If not for the Turkish Coast Guard, the Mediterranean Sea could have turned into a "grave" for the asylum seekers, Celik said.

According to Celik, Greece is trying to turn its issues with Turkey into issues between Turkey and the EU. He called on EU officials to urgently respond to the actions of the Greek Coast Guard.