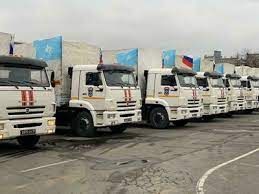 Russian peacekeepers facilitated a delivery of the humanitarian cargo to the Azerbaijani district of Kalbajar, the press office of the Russian Defense Ministry announced on Thursday, Eurasia Diary reports citing Tass.

According to the press service, Russian peacekeepers helped to escort the delivery of 200 tonnes of the humanitarian aid, which included construction materials as well as equipment for power supplies.

"In order to restore the power and water supply systems of social facilities and residential buildings, the 14th Russian convoy of the Humanitarian Response Center, consisting of 17 Kamaz military vehicles and escort vehicles, delivered about 200 tonnes of humanitarian aid to Kalbajar District," the statement from the Russian ministry reads.

Renewed clashes between Azerbaijan and Armenia erupted on September 27, 2020, with intense battles raging in the disputed region of Nagorno-Karabakh. Baku and Yerevan have disputed sovereignty over Nagorno-Karabakh since February 1988, when the region declared its secession from the Azerbaijani Soviet Socialist Republic.