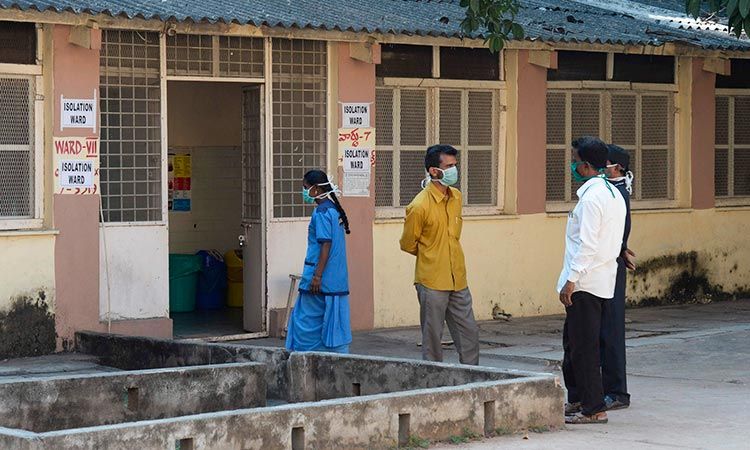 Thirteen Covid-19 patients died when a fire broke out in a hospital on the outskirts of Mumbai before dawn on Friday,
"There were 17 patients inside when a fire broke out in the ICU of Vijay Vallabh Hospital, out of which 13 died and four have been shifted to other facilities," fire department official Morrison Khavari said.
"The fire has now been extinguished," he said, adding that the blaze started around 3am (2130 GMT) and that the cause was being investigated, a local official told media.
The accident in the city of Vasai-Virar in Maharashtra state was just the latest tragedy to hit India as it battles a vicious new wave of coronavirus infections, with shortages of oxygen, drugs and hospital beds sparking desperate pleas for help.
Two days earlier, 22 Covid-19 patients died at another hospital in the same state when the oxygen supply to their ventilators was disrupted by a leak.
And four patients died when a blaze broke out in a private hospital in Maharashtra earlier this month.
Last month a fire at a Mumbai clinic killed 11.
India has seen four million new Covid-19 infections this month alone, stretching its chronically underfunded health care system to the limit.
The outbreak has been blamed on a new virus variant and lax government rules allowing huge religious and political gatherings to take place in recent months.
This includes the vast Kumbh Mela gathering in Haridwar, which between January and this week attracted an estimated 25 million Hindu pilgrims, mostly without masks or social distancing.
Indian Prime Minister Narendra Modi was set on Friday to hold at least three crisis meetings on oxygen supplies and the availability of critical medicines.
The capital New Delhi continues to be among the worst hit, with hundreds of thousands of new infections and many new hospitalisations in the last few days.