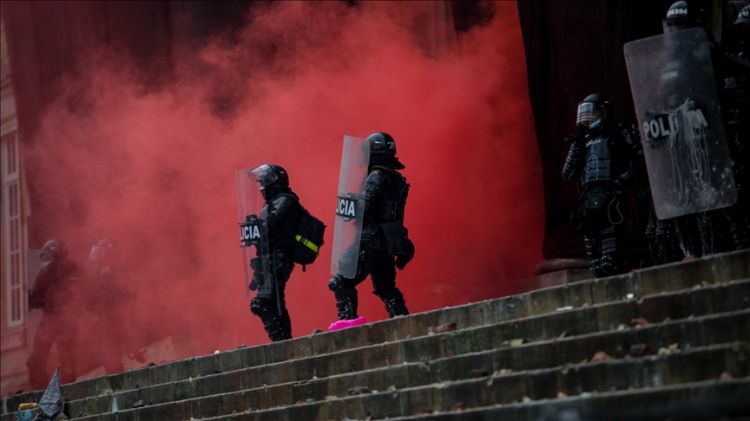 Shortly after thousands of people gathered in the historic Plaza de Bolivar on Wednesday, security forces used tear gas to disperse a group of protesters who attempted to enter Colombia's Congress.

The unrest has been sparked by tax reform proposed by President Ivan Duque, who withdrew the controversial bill after days of massive protests across the country. Demonstrations continued as unions have made more demands of the government, including eliminating the riot police.

More than a week of violent protests have seen at least 24 people killed. Colombia's Ombudsman confirmed that 87 people were missing as of Wednesday.

Many roadblocks remain across the country, which have caused food, fuel and medical supply shortages.

Doctors appealed to the organizers of the national strike as hospitals announced they were running out of oxygen for COVID-19 patients.

On the road between Bogota and Tunja, protesters prevented an ambulance from taking a pregnant woman to the hospital in the capital after she went into premature labor. The ambulance was not allowed to pass and the baby died.

On Tuesday night, crowds attacked 15 police stations in Bogota. Some people attempted to burn a station where members of the public forces remained. Nineteen police officers and 72 civilians were injured overnight.

Bogota Mayor Claudia Lopez said the city experienced a "tragic and painful" night on May 4.

"The level of destruction, of violence, of attacks against citizens, against our public property, against our police, is truly unheard of," she said.

President Duque has said that guerrilla dissidents are behind the vandalism, looting and attacks against police.​​​​​​​

The crisis comes as Colombia struggles with a third wave of the coronavirus. The country has recorded nearly 3 million cases and more than 76,000 deaths, according to a tally by US-based Johns Hopkins University.