The refusal of Kocharyan-Sargsyan blocs to recognize results of elections is tactical character - Expert
Read: 393

Friendship and brotherhood between Azerbaijan and Turkey nations are our greatest wealth - Parliament Speaker
Read: 263

Common understanding is impossible between US and Iran during presidency of Raeisi - Expert
Read: 213

Without the support of NATO, the UK cannot give a serious response to Russian strike - Expert
Read: 195

Cooperation and security without dividing lines is a common goal of countries - Putin
Read: 193

Three presidents could save Armenia - Ter-Petrosyan 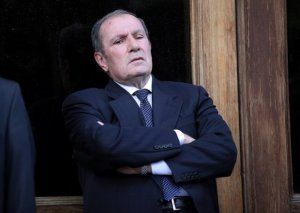 First President of Armenia Levon Ter-Petrosyan revealed the details of the meeting with Serzh Sargsyan and said why he was doing it right now, Eurasia Diary reports citing Azeri Daily.

According to Sputnik Armenia, in Ter-Petrosyan's opinion, the best way to prevent a national tragedy in Armenia is to unite the three presidents, and it was on this basis that he turned to the former heads of Armenia Robert Kocharyan and Serzh Sargsyan, proposing joint participation in the early election.

Ter-Petrosyan met with Sargsyan on May 1 and proposed to jointly participate in the upcoming general election. He noted that this bloc would not be as effective as the alliance of the three former presidents of Armenia.

However, Sargsyan did not accept Ter-Petrosyan's proposal.

'Declassifying statements of both trilateral and bilateral formats, I pursued only one goal - to exert public pressure on the second and third presidents, since I considered it possible to participate in the election in a bloc with them,' Ter-Petrosyan says, adding that there was no agreement to kept the content of the meeting in secret, and he does not conclude political deals secret from the public.

The first president of Armenia stressed that, judging by the reviews of the previous publication, he considers his goal to be partially achieved. According to him, many politicians, analysts, journalists who were not his supporters welcomed his proposal.

The day before, Ter-Petrosyan disclosed the details of the meeting of the former presidents of Armenia, which took place on March 25 on his initiative. Ter-Petrosyan turned to Robert Kocharyan and Serzh Sargsyan with a proposal to jointly participate in the early election. In response, Kocharyan's office noted that it is incorrect to unilaterally publish the details of the meeting, especially when the narrator distorts the content of the conversation.

Sargsyan's office also expressed surprise that the ex-head of the Armenian state made public statements without informing the other participants of the meeting in advance.