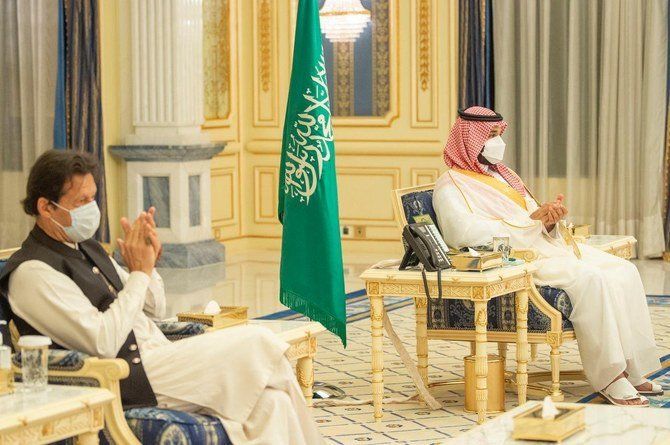 Ahead of the visit, Pakistan’s Cabinet on Tuesday approved the establishment of the council – a body created for streamlining bilateral cooperation between the two countries – to ‘remove hurdles’ to investment deals signed during the crown prince’s visit to Pakistan in February 2019.

“Another MoU for financing eligible projects in the fields of energy, infrastructure, transportation, water, and communications between the Saudi Fund for Development (SFD) and the Islamic Republic of Pakistan was signed as well,” Al-Arabiya TV reported separately.

The two leaders also witnessed the signing of agreements increasing cooperation on people sentenced to penalties depriving freedom, and on crime prevention.

Khan arrived in the Kingdom on Friday evening for a three-day visit on the invitation of the crown prince, who was present at Jeddah airport to receive him and the first lady. He is accompanied by a high-level delegation, including the foreign minister and other members of the Cabinet.

“Special emphasis was laid on increasing Saudi investments in Pakistan, collaboration in the field of energy, and increased job opportunities for Pakistanis in Saudi Arabia,” the statement said.

Saudi Arabia is home to more than two million Pakistanis who remit billions of dollars back home every year.

On regional issues, Khan outlined his vision of a ‘peaceful neighborhood.’ He lauded the crown prince for efforts and initiatives aimed at reinforcing and promoting regional peace.

Khan highlighted the situation in Indian-administered Kashmir and stressed the importance of a peaceful resolution of the Jammu and Kashmir dispute. He also said Pakistan had made consistent efforts to support peace and reconciliation in Afghanistan, the statement reported.

The Afghan question is important in the region against the backdrop of foreign troops pulling out of Pakistan’s neighboring country after a war that has lasted two decades, and that ends with the Taliban controlling huge swathes of the country.

During talks, issues related to the environment and climate change were discussed and the PM reportedly appreciated the crown prince’s ‘Green Saudi Arabia’ initiative.

Khan has reportedly also invited the crown prince to visit Pakistan at his earliest convenience, the foreign office said.

He also discussed defense cooperation with the Saudi military chief of staff.