The refusal of Kocharyan-Sargsyan blocs to recognize results of elections is tactical character - Expert
Read: 344

Friendship and brotherhood between Azerbaijan and Turkey nations are our greatest wealth - Parliament Speaker
Read: 234

Common understanding is impossible between US and Iran during presidency of Raeisi - Expert
Read: 194

We will continue to support Azerbaijan - Turkish President
Read: 189

Cooperation and security without dividing lines is a common goal of countries - Putin
Read: 178

6 killed in explosion at police station in Somalia's Mogadishu 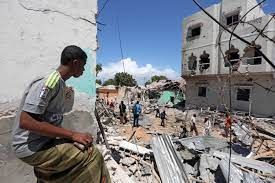 At least six people, including two law enforcement officers, were killed when a suicide bomber targeted a police station in Somalia's capital Mogadishu, the country's Ministry of Information, Culture and Tourism has confirmed.

"Somali PM Mohamed Roble has condemned the cowardly terrorist attack on Mogadishu's Waberi district police station that claimed lives of six people including two police officers. The PM extended his condolences to the families and the people of Somalia on the loss of lives," the Information Ministry said on Twitter.

According to Somali National Television (SNTV), the explosion occurred at Mogadishu's Waberi Police Station on Sunday evening, when a suicide bomber drove a vehicle filled up with explosives into the front gate of the station.