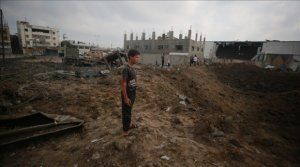 The call came during talks over the phone between Jordanian Foreign Minister Ayman Safadi and his Saudi counterpart Prince Faisal bin Farhan.

“The two ministers emphasized the necessity of crystallizing an effective international effort to protect the Palestinians against Israeli attacks and violations," Jordan’s Foreign Ministry said in a statement.

The statement said the two ministers condemned "illegal Israeli practices", warning that continued Israeli aggression against the Al-Aqsa Mosque and the Gaza Strip, and the eviction of Palestinian families from their homes in the Sheikh Jarrah neighborhood will have consequences.

The two countries called on Israel to stop its violations against the Al-Aqsa Mosque and “respect the historical and the existing legal status of Jerusalem and its sanctities”.

Tension has been running high in the Sheikh Jarrah neighborhood of East Jerusalem since last week when Israeli settlers swarmed in after an Israeli court ordered the eviction of seven Palestinian families.

The tension spiraled into Gaza after Palestinian resistance factions issued an ultimatum for Israel to halt its assaults at Al-Aqsa Mosque compound and Sheikh Jarrah neighborhood and release detainees.

According to Palestinian health authorities, 24 Palestinians were killed and at least 822 wounded as of Tuesday dawn as a result of Israeli attacks in the Gaza Strip, the West Bank, and Jerusalem.