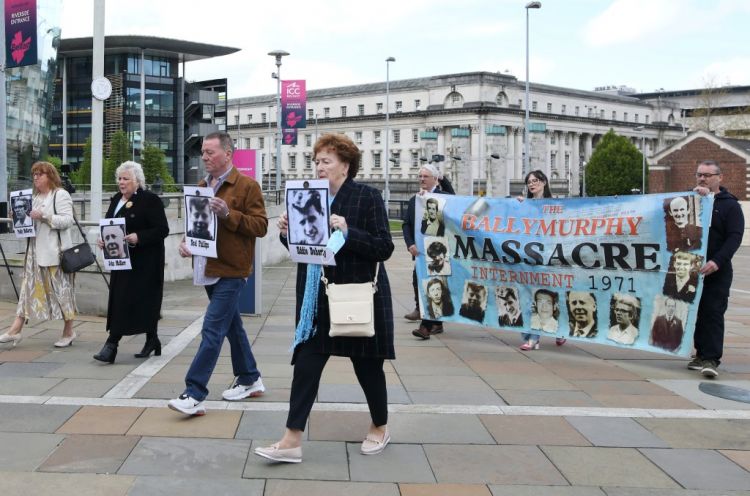 A Northern Irish high court judge on Tuesday declared that British soldiers fatally shot innocent civilians, among them a mother of eight and a Catholic priest, nearly 50 years ago in a West Belfast massacre that foreshadowed the infamous Bloody Sunday killings that helped ignite a decades-long sectarian conflict known as the Troubles.
Justice Siobhan Keegan’s findings bring to a close a decades-long fight by family members of the victims to put the record straight about the killings in August 1971 in a West Belfast residential district called Ballymurphy. Keegan presided over a new coroner’s inquest and she found that nine of 10 civilians were unjustifiably killed by British soldiers, while there was not enough evidence to establish who killed the tenth unarmed victim.
At the time, the official narrative of the British military, mimicked by the British media and officialdom, claimed that those killed were gunmen with the Provisional Irish Republic Army, a paramilitary force fighting against British rule in Ireland.
The killings in Ballymurphy coincided with turmoil sweeping across Northern Ireland in August 1971 after the British government sent the Parachute Regiment, an elite fighting branch of the British army, into Northern Ireland to defeat the IRA. Simultaneously, British authorities began arresting suspected IRA members and holding them without trial, a policy that sparked chaos and anger.
The Parachute Regiment’s killing of civilians in Ballymurphy foreshadowed the regiment’s actions nearly six months later in Londonderry when 13 unarmed civilians were killed in the infamous Bloody Sunday shootings on Jan. 30, 1972.
“The official verdict today is innocent,” said John Teggart, whose father Daniel Teggart was shot 14 times in Ballymurphy, speaking on Sky News television.
He said the inquest laid bare “the lies” of British generals who said “all our loved ones were gunmen and gunwomen.”
“That there’s been cleared, that’s been dumped and threw in the bin; and the lies that was told have been overturned today,” he said. “That’s what our campaign was about. My father can rest in peace and I will rest easy now.”
The inquest into the Ballymurphy massacre, as it has become known, became a highly significant test for efforts in Northern Ireland to properly investigate crimes that occurred during the Troubles, which left more than 3,600 people dead.
It followed the groundbreaking inquest into the Bloody Sunday massacre, which concluded in 2010 with a finding that soldiers fired unjustifiably on unarmed civilians. The Blood Sunday probe began in 1998 and became Britain’s longest and most expensive public inquiry at a cost of about $242 million.
In 2011, under pressure from the families of the victims at Ballymurphy, Northern Ireland’s attorney general opened an investigation in the Parachute Regiment’s actions in Ballymurphy.

Keegan’s inquest looked at five separate incidents where 10 people were killed. She said there might have been IRA members in Ballymurphy at the time, but she said none of those killed were armed and posed no threat to British soldiers. She said the army’s actions were unjustified.
The first shooting occurred on Aug. 9 when Father Hugh Mullan, a Catholic parish priest, was killed after he tried to help a man shot in a field, Keegan found.
“These were innocent men, were not armed and were not acting in any untoward manner,” she said, reading her findings to a courtroom packed with emotional family members of the victims, as reported by the Belfast Telegraph.
Later that day, soldiers killed four others, among them Teggart and Joan Connolly, a 44-year-old mother of eight. She was left by soldiers to bleed for several hours in the field where she was shot. The coroner’s report said “there was a basic inhumanity associated with leaving Mrs. Connolly in the field for so long.”
“The four deceased were unarmed and were not acting in any way of threat,” the report said. “No arms were found on or near the deceased and there was no evidence of gunshot residue that satisfied evidential standards.”
On Aug. 10, a 31-year-old man who posed no threat was shot by a British soldiers as he walked near a clash between soldiers and protesters who had barricaded a road, the report said. Keegan rejected suggestions that he had thrown a petrol bomb before being shot.
Two other men were shot on Aug. 11 and Keegan said there was no evidence they were gunmen. The final unarmed victim, John McKerr, was shot on Aug. 11, but Keegan said there was not enough evidence to establish who shot him although there were soldiers in the area at the time of the shooting.
The verdicts will put pressure on Northern Irish prosecutors to bring charges against soldiers and commanders still alive who were involved in the massacre. In September 2019, the trial of a former member of the Parachute Regiment began for his actions in Bloody Sunday. The soldier, known only as “Soldier F,” is accused of killing two unarmed civilians and wounding four others.
Among those who testified for the Ballymurphy inquest was a top British military chief, General Sir Mike Jackson, the former head of the British army and chief of the general staff. He was an army captain at Ballymurphy.
The subject of prosecutions is a highly sensitive issue, driving a wedge between Catholic and Protestant communities in Northern Ireland and between Ireland and Great Britain.
British Prime Minister Boris Johnson is reportedly pushing to pass amnesty legislation to shield ex-soldiers from facing prosecutions for their actions in Northern Ireland prior to the 1998 Good Friday agreement that ended the Troubles.
On Tuesday, just as the Ballymurphy verdict came out, Queen Elizabeth II sparked speculation about a controversial amnesty law when she laid out the government’s priorities in a new Queen’s Speech, a symbolic occasion to open a new session of parliament.
“Measures will be brought forward to strengthen the devolved government in Northern Ireland and address the legacy of the past,” the queen said in the speech.
Grainne Teggart, Amnesty International’s campaign manager in Northern Ireland, denounced the possibility of an amnesty.
“What has been announced today is vague, but government briefings suggest a bill which would prove a dangerous precedent for the rule of law,” he said in a statement. “If what has been briefed is true, the government plans to put those who committed murder and other grave human rights abuses above the law and beyond accountability.
For Briege Voyle, the daughter of Joan Connolly, the woman left to bleed to death in 1971 in Ballymurphy after she was shot by British soldiers, proposing an amnesty is an affront.
“I can’t really understand it,” she said, speaking on Sky News. “It’s disrespectful.”
She said ex-soldiers who killed innocent civilians in Northern Ireland went on to enjoy their lives while their victims were denied that chance.
“My mummy, she’s got 24 grandchildren and 20 great-grandchildren and she would have just had a really good life,” she said. “Why should they have taken it away from her? We have got justice today to say she was an innocent woman but the army won’t come forward and tell us why. Why she was shot?”
She added: “Why has anybody got a right to come and murder our loved ones and think they can just walk away? Murder is murder, everybody is entitled to justice. Everybody’s entitled to a proper investigation.”