Talismans, amulets and animal skin were also found on smugglers who sell or trade such objects 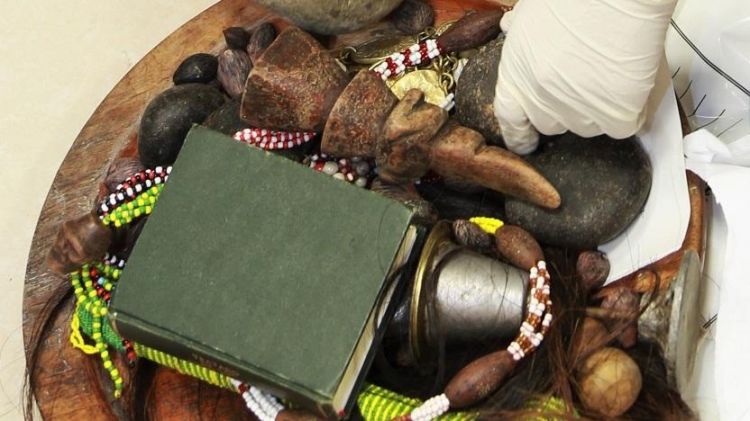 Dubai Customs foiled 35 attempts in the last three years to import more than 68kg of ‘black magic’ items at Dubai International Airport.
Officers seized items associated with the practice of witchcraft and sorcery, such as talismans, amulets, animal skins, bones and blood, between 2018 and 2020.
“Items that could be associated with sorcery or black magic are prohibited under a decree by the GCC Financial and Economic Cooperation Committee,” said Khalid Ahmad, director of passengers operations at Dubai Customs.
In the attempts to import 68.4kg of black magic goods, officers also confiscated sorcery knives, needles, ampoules full of animal blood and other liquids, animal hair, bones and drawings, pieces of metal, rings and magic techniques books.
“Attempts to bring these prohibited materials into the country in various ways are considered smuggling in accordance with the unified customs law,” Mr Ahmad said.
He said an African woman who was caught in 2018 carrying 10.8kg of black magic items was also detected a year later trying to smuggle 8.4kg of similar objects and books.
Mr Ahmad said well-trained customs officers depend primarily on their skills in reading body language to detect who might be carrying such items before screening and manually checking luggage.
“Training happens with help from the Department of Islamic Affairs and Charitable Activities in Dubai,” he said.
“Once confiscated, items are referred to relevant authorities to be dealt with.”
Practising black magic or attempting to smuggle sorcery items is illegal under Article 316 of the UAE’s Penal Code. People caught smuggling black magic objects are subject to prison and/or fines.
A total of 47.6kg of witchcraft items that could have been used for deception were seized in 2018.
The following year, 12.9kg of items were confiscated from passengers in 2019 and 7.9kg was seized in 2020.
Dubai Customs said its efforts in spreading awareness about carrying these items has helped bring the number of smuggling attempts down.