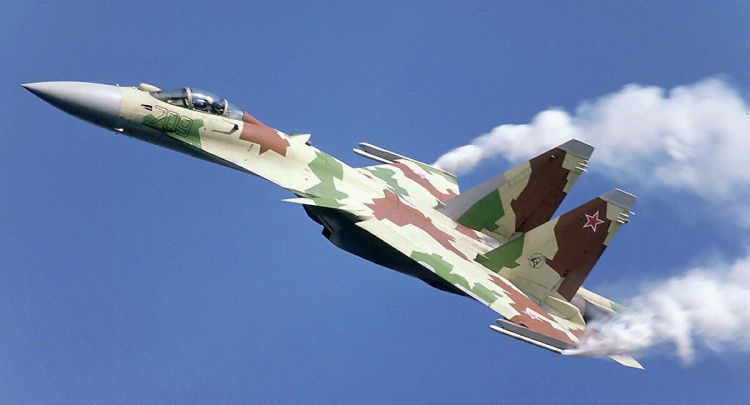 In 2020, Russia delivered a batch of 4th generation (4 ++) fighters to a foreign client, but it hides the country’s name, BulgarianMilitary.com has learned, quoting the Russian media Vzglyad. The information comes from the annual report of the aircraft manufacturer – PAO Sukhoi.
- Su-35 Flanker-E – Russian 4++ generation fighter jet [review]
- Dogfight! Russian Su-35 fighter jet vs.British Eurofighter Typhoon
- F-35 vs. Su-35 – who is better and who will win in a modern air battle?
The report states delivery has been made, and the customer has accepted it and put the fighters into operation. However, customer information is hidden. There are several speculative opinions. Various comments send the delivery to China; others suggest that it is Armenia, Belarus, or Egypt. Some even go so far as to tell that this is Turkey.
This information is not confirmed yet, but we know that 24 Su-35 fighters are in service in China. Beijing has paid $ 2.5 billion for these fighters, but this amount is not included in the company’s annual report. From sources in the Russian Ministry of Defense, we know that Russia is ready to sell more fighters to China, but this deal has not yet been made and cannot be included in the annual report.
Earlier, the advent of the Su-30CM and Su-35 fighters allowed pilots to fly at supercritical angles of attack, which expanded the possibilities for aerobatics. The Su-30CM and Su-35 retain the aerodynamics of the Su-27 fighter but acquire more powerful engines and modern avionics. Also, the new machines have even more excellent maneuverability and become even easier to operate. In addition, Su-35 has a stand-alone unit that allows air conditioning and power on board with the engines off.
Who are the other potential customers?
The interest in the Su-35 is excellent. There is a general international opinion that this fighter is the best of the Russian Air Force, which can easily face the American F-22 and F-35, even defeat them.
India is one of the possible countries to buy the Su-35. Negotiations were held between the two countries, and the number 114 was quoted – that’s how much New Delhi wanted to buy from Russia. The problem, however, is that such a deal cannot go unnoticed in the world, no matter how hard the Russians try to hide it. Therefore, the Indian version of the purchase is not reliable.
Iran is another possible customer of the Russian Su-35 fighters. This possibility is more likely, as Iran would not immediately rush to boast of the acquisition but would use these fighters as a “surprise” at a particular time of violating the country’s airspace. We know that Iran is no longer under an arms embargo, and in recent years the Su-35 has been linked to a possible purchase, along with Russia’s S-400 air defense systems. But, satellite images would quickly reveal the presence of these fighters, although the use of hangars could not do that.
There is a third possibility – Russia. Moscow has no problem increasing its own Air Force power, so such a purchase is quite logical. But Russians also like to brag to the world that they have increased their power. Although such a version is the most reliable of the above, Russia does not fall into “foreign client” in the company’s annual report.