US policy of maximum pressure on Iran continuing: envoy 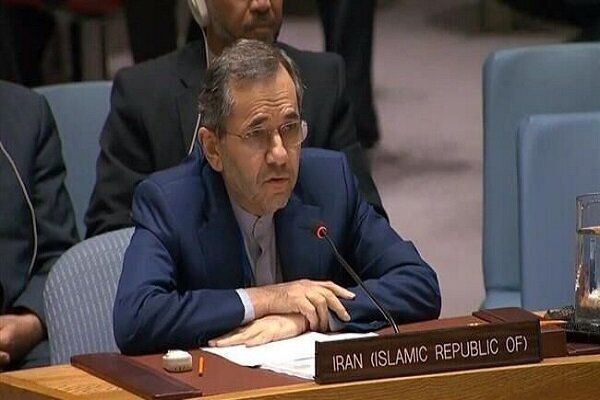 Iran's permanent envoy to the UN said that the claim of the current US administration to change its policy towards the JCPOA is meaningless, and in practice, the US policy of maximum pressure against Iran continues, Eurasia Diary reports citing Mehr News.

Addressing the meeting of the General Assembly of the United Nations to review the annual report of the Security Council, Majid Takht-Ravanchi explained the positions of the Islamic Republic of Iran on some developments in the Middle East in 2020 and the relevant actions of this council.

"When in the first days of 2020, the United States martyred the heroes of the anti-terrorist, including Lt. Gen. Soleimani, in a terrorist act on the direct order of the President of this country and a few days later, the US president threatened to attack 52 of Iran's most important cultural sites, the Security Council remained silent for a long time," he said

"Of course, that same year, when the United States introduced a draft resolution imposing an arms embargo on Iran, 13 members of the Security Council categorically rejected it. Subsequently, when the US tried to activate the snapback mechanism against Iran, the same 13 members of the Council rejected the US action and declared that by withdrawing from the JCPOA, the US lost any right to use the snapback mechanism and its claim in this regard is illegitimate and has no legal, political or practical effect," the envoy added.

Takht-Ravanchi went on to say, "The claim of the current US administration to change its policy towards the JCPOA is meaningless, and in practice, the US policy of maximum pressure against Iran continues, including the fact that Iran is not even able to import drugs using its financial resources abroad."

"Although the ongoing nuclear talks in Vienna are the first step in assessing the correctness of the US real political will to return to the JCPOA, the main and real test will be when, after verification, it is proven that the US has changed course and abandoned its failed policy of maximum pressure, as well as stopped its economic terrorism against Iran," the Iranian diplomat underlined.

The meeting of the Joint Commission of the JCPOA and the continuation of negotiations in Vienna for the revival of the deal are scheduled to resume today in the Austrian capital.

Since April, representatives from Iran and the P4+1 group of countries have been holding talks in Vienna aimed at revitalizing the JCPOA and bringing the US back to compliance. The US has sent a delegation to Vienna but it is not attending the JCPOA Joint Commission talks directly as Washington is no longer a party to the deal. It has, however, held separate talks with the other parties to the JCPOA.

The US, under former president Donald Trump, left the JCPOA in 2018 and returned the sanctions that had been lifted against Tehran as part of the agreement. US President Joe Biden has said Washington is willing to return to the pact if Tehran first suspends its countermeasures taken in response to US violations and reimposition of sanctions.

Iran says the onus is on the US to revive the deal as it was Washington, not Tehran, that left the internationally recognized accord in defiance of global criticism.