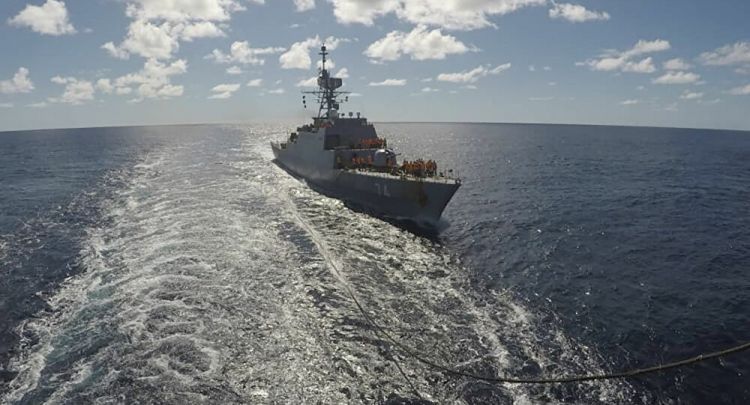 The US earlier expressed concerns regarding media reports about two Iranian warships in the Atlantic Ocean possibly trying to deliver weapons to Venezuela. The online publication Foreign Policy noted, however, that Washington's options to legally stop them are severely limited, Eurasia Diary reports citing Sputnik.

One of the two Iranian Navy warships sailing through the Atlantic Ocean might be carrying up to three million gallons of fuel for Venezuela, Maritime expert Sal Mercogliano has told the Daily Mail. Mercogliano came to this conclusion by studying satellite images, obtained by USNI News, of the Makran - a retrofitted military oil carrier that showed the vessel sailing low in the water and possibly transferring to the second Iranian ship, Sahand.

She is loaded down to the gills. She is obviously loaded with fuel but much more fuel than what's needed", Mercogliano suggested.

Oil or fuel is not the only ware that Makran is suspected of carrying to Venezuela – its alleged, but still unconfirmed, destination. The Daily Mail cites another set of satellite images, captured by Maxar Technologies, as showing signs that the retrofitted carrier is also loaded with at least seven fast-attack boats alongside the purported shipment of fuel.

The Iranian Navy actively uses such high-speed vessels capable of manoeuvring around larger warships and carrying out strikes against them using machine guns and rockets.

When it comes to fuel shipments from Iran to Venezuela, the two countries have already engaged in such operations in the past. Tehran sent several tankers under its flags to help Caracas cope with the petroleum shortages in the country. All of them successfully reached the nation's shores. Yet, the US claims to have intercepted several ships sailing under non-Iranian flags but purportedly carrying Iranian fuel for Caracas. Tehran denied owning the intercepted petroleum, but condemned Washington's attempts to intercept such shipments as state piracy.