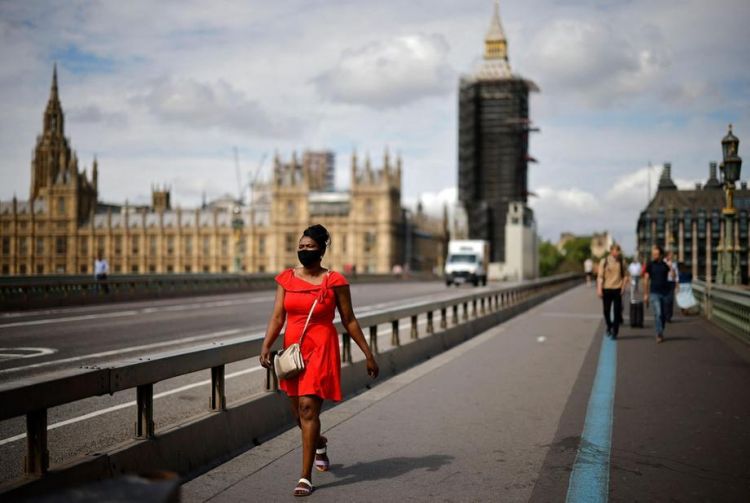 British Prime Minister Boris Johnson said he is now less optimistic about the UK’s pandemic outlook, and suggested a scheduled easing of coronavirus lockdown restrictions may be delayed.
It looks increasingly likely that the next easing will not take place on June 21, as case numbers surge because of unvaccinated patients falling ill with the highly infectious Delta variant.
On Saturday, Mr Johnson said there was no argument to be made for the lockdown to be thrown into reverse, but the vaccination programme needed more time to become more effective.
"It's clear that the Indian variant is more transmissible, and it's also true that the cases are going up, and that the levels of hospitalisation are going up," Mr Johnson said.
"Now, we don't know exactly to what extent that is going to feed through into extra mortality, but clearly it's a matter of serious, serious concern."
"There is no case being made for going into reverse. The context has changed radically because of the number of people vaccinated," he said.
If a delay in relaxing controls is confirmed, the idea would be to give the vaccination programme more time.
What’s happening with the lockdown?
England is on a four-stage roadmap to returning to normality, but the route is also filled with checks against the latest coronavirus outbreaks.
As the country faces an increase in new cases, the options are understood to include a delay of between two and four weeks to the roadmap.
The re-opening of nightclubs and easing social distancing rules are among the measures earmarked for a delay.
The scheduled date for the next relaxation of restrictions is June 21, with an announcement due to be made a week earlier.
As June 14 approaches, ministers and health experts are examining the data to decide whether to delay easing controls.
What are the four tests?
The four tests the government has laid out for easing lockdown measures are:
Continued rollout success
Reduced hospital cases and deaths
Infection rates that do not threaten the National Health Service
Risks attached to variants of concern
The vaccine campaign is hitting government targets with a proportion of the over-55 population having received both doses. People in their 30s are also able to get the first injection. Teenagers are so far largely unvaccinated unless they have medical needs.
The past week has seen some of the worst days for new cases since lockdown easing began and nine of every 10 cases are the Delta variant – which was first identified in India.
Britain on Friday reported 8,125 new cases, the highest daily total since February. The reproduction "R" number – the number of people to whom one infected person is likely to transmit a virus – and daily growth rates were also higher in estimated forecasts.
This suggests figures are growing exponentially.
There has been a statistically significant rise in the number of people in hospital, with the seven-day average rising from 120 to 173.
Some risks from the Delta variant are still unknown, as many cases have been recorded in the past 28 days, and the true scale of hospital cases is not yet apparent.
People with the Delta variant are twice as likely to end up in hospital than those with other strains.
Data suggests about two-thirds of people infected with the Delta variant have not had a single dose of a vaccine.
"We are starting to see perhaps early signals that hospital admissions are going up but it's still unclear," said Dr Mike Tildesley, a member of the Scientific Pandemic Influenza Modelling group.
Vaccine passport ‘discriminatory’
Conservative MP Tobias Ellwood wants to see some easing of lockdown measures on June 21, even if England is not able to follow the roadmap completely.
"The two things I would like to see change are allowing those who have been vaccinated twice ... to be able to travel to the EU, so us joining in with that digital passport scheme that's already up and running.
"And then we know that it’s the vaccinations that gets us out of this – let’s continue to vaccinate into teenagers as well."
A report by the UK House of Commons public administration and constitutional affairs committee criticised discriminatory effects of the proposed vaccine passport.
The system would "by its very nature be discriminatory" on the grounds of race, religion, and socio-economic background and age – as many younger people so far have not been eligible for the vaccine.
"We found no justification for introducing a Covid-status certification system that would be sufficient to counter what is likely to be a significant infringement of individual rights," the report said.